I didn’t hate last week’s premiere (although it was another convoluted mess of ideas about a government conspiracy nobody cares about), but it’s a relief to see The X-Files back doing what it always did best: a standalone adventure with Mulder (David Duchovny) and Scully (Gillian Anderson) right at the centre, working together against all the odds and not knowing who to trust.

“This” was written and directed by The X-Files veteran Glen Morgan, whose scripts with James Wong were arguably creative peaks in the mid-1990s, as the series began to deteriorate once they left. It’s a shame Morgan and Wong aren’t writing partners now, as the projects they do separately always seem to be missing something to me, which is possibly why “This” was an entertaining hour lacking in some areas. I’ll soon forget about.

It opened very strongly, with Mulder and Scully asleep on a sofa at home, awoken by a garbled video-call from Ringo Langley (Dean Haglund), one of the three Lone Gunmen conspiracy nerds. For those who stopped watching X-Files once Duchovny quit the series, those cult characters were killed off in season 9’s “Jump the Shark”, so at first it seemed to be a mysterious warning Langley had recorded to autodial Mulder after a mysterious trigger comes to pass. Minutes later, three assassins (who resembled the Lone Gunmen in silhouette), arrived at the house to try and kill our heroes, before a Blackwater-style private army led by a Russian swept in for a second attempt. Mulder and Scully managed to escape, meeting up with Skinner (Mitch Pileggi), before going on the run to figure out what Langley’s message means, if he’s somehow still alive, and why someone wants them both dead… 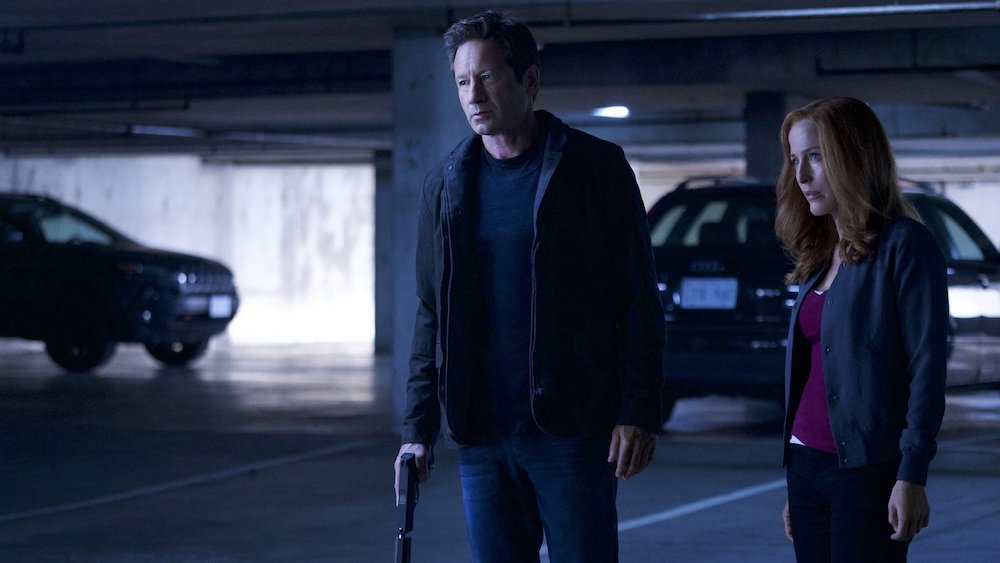 “This” told a messy storyline, and I still don’t understand why certain things happened and Mulder and Scully were targeted so aggressively. By the end, they realised that Langley’s one of hundreds of minds that were digitised and uploaded onto a Manhattan server, becoming part of a “digital afterlife” that new villain Erika Price (Barbara Hershey) has created to keep mankind in existence once the world ends. Quite why a nerd like Langley was selected for this procedure wasn’t clear to me, as he would surely be a terrible candidate and risk blowing the lid on everything. And if the only real problem here is that digital-Langley got a message out to the real world, imploring Mulder to shutdown the server because it’s essential a virtual prison for electronic souls, why not fix that issue at its source rather than go after Mulder? I don’t understand how Langley was able to make a video-call from inside a top secret server, either. That’s quite the security flaw. 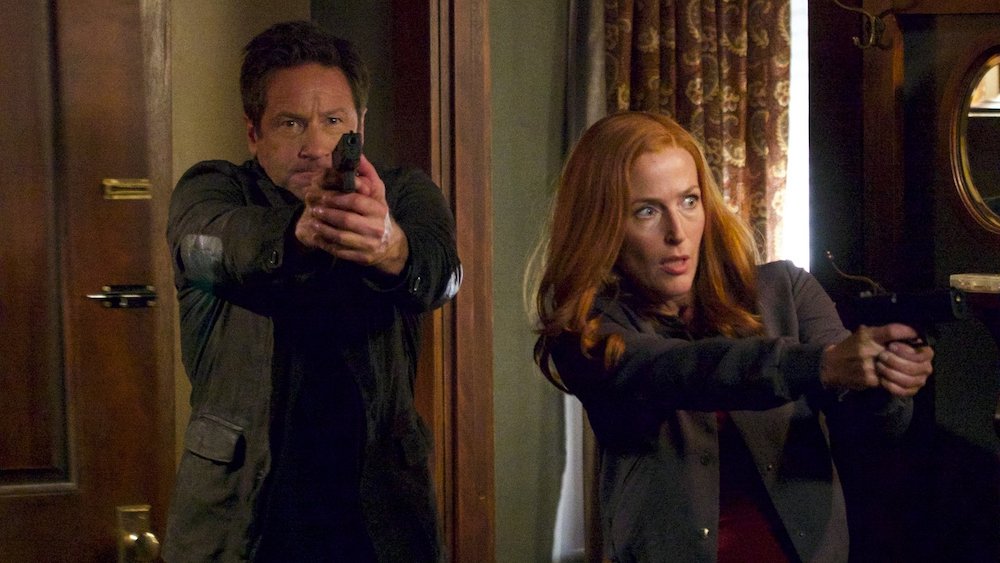 Still, ignoring some of my complains about how this episode’s logic hung together by the end, it was fun and fast-paced in the moment to perhaps try and hide these issues. Mulder and Scully on the lam, pursued by deadly intelligence agents, finding clues and solving problems to get to the bottom of a big mystery, is an entertaining framework for any X-Files storyline. I especially loved the nighttime scene at Arlington National Cemetery, where the birthdates of the buried Lone Gunmen were revealed to be coordinates to a nearby grave containing a QR code where Deep Throat (the government insider who started Mulder down this path) was interred. We even learned Deep Throat’s real name — Ronald Pakula — his surname likely a nod to Alan Pakula, director of conspiracy movie All the President’s Men (1976). 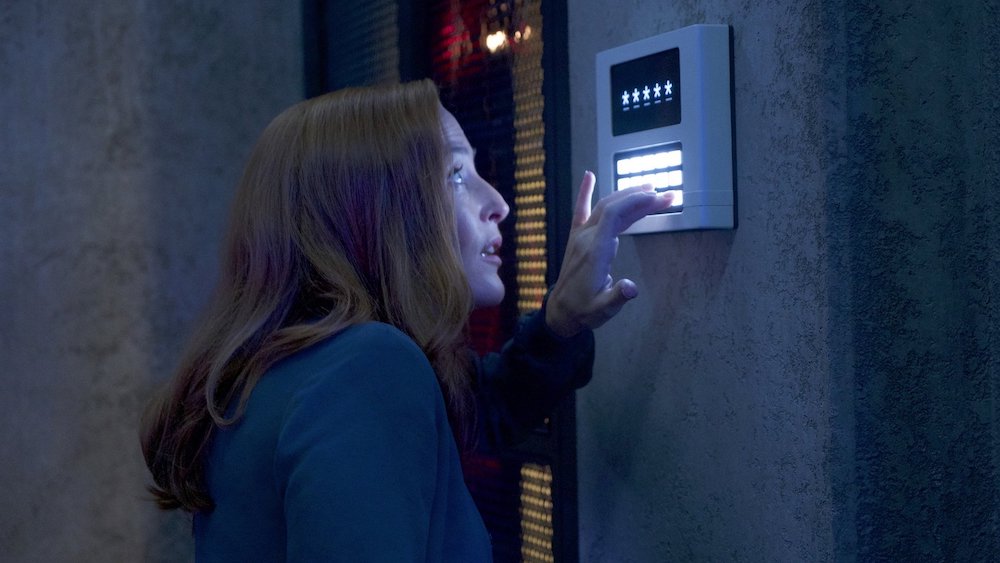 There were plenty of other in-jokes and references to classic episodes in “This”, as most of Glen Morgan’s scripts tend to have. I noticed a grave belonging to producer/editor Julie Ng (who worked on Morgan and Wong’s Final Destination franchise), and there was a digitised x-file about “Home, Pennsylvania” (location of the infamous season 4 episode about inbred cannibals). For a relatively serious life-and-death escapade, there was also a surprising amount of comedy — such as Langley’s desktop files containing a ‘Spank Bank’ folder on Scully, Mulder pondering the deliciousness of a internet cafe’s muffin, a moment when he almost puked on Scully after a gruelling fist-fight, a Hannibal Lecter name-check (Anderson was a semi-regular on NBC’s Hannibal), and even a suggestion that handcuffs are part of their kinky sex life. The ‘shippers probably went into meltdown.

Since its season 10 revival, The X-Files keeps finding awkward ways to remind us that times have changed, and “This” mentioned the numerous intelligence agencies that are bigger players in the 21st-century, together with foreign enemies like ISIS. It’s fair to bring this up, but in some ways it also makes X-Files seem like a relic from a simpler past that has no real business being here. The concept of creating a digital Noah’s Ark isn’t something I remember classic episodes doing, but a few probably came close. The show ate a lot of material back in the day. But if it was indeed fresh terrain, beyond what anyone thought would be possible 20 years ago, that’s great, but the idea isn’t particularly original. There was no unique twist here, just questions about why they were bothering to upload people like author Michael Crichton. And yes, Black Mirror has covered this “electronic afterlife” idea with a great deal more depth and emotional impact.

Written By
Dan Owen
More from Dan Owen
With the help of a magic ticket, a young film fan is...
Read More