I’ve been impressed with how quickly Westworld is rattling along, as part of me suspected it would spin its wheels—as so many sci-fi television shows built around mysteries tend to. Instead, I’m suspicious about the creator’s allegedly mapping out five years (the official reason the premiere was delayed by months), as I could easily imagine this story wrapping up over the next six episodes.

“Dissonance Theory” was an hour rich with momentum and big developments for some of the key characters, in their currently isolated quests to crack the meaning of their own existence, or the deeper meaning of the ‘game’ being played. The most action-orientated of those stories was the latter, with The Gunslinger/Man in Black (Ed Harris) still searching for the elusive ‘Maze’ he believes is the parting gift of the park’s deceased co-founder Arnold. Acting on the clue he was given last week by Lawrence’s (Clifton Collins Jr) daughter (“follow the blood arroyo to the place where the snake lays its eggs”), MIB deduced that the “snake” in question was a full-body tattoo on female bandit Armistice (Ingrid Bolsø Berdal), whom he finds bathing in the river.

Agreeing on a deal where MIB springs Armistice’s boss, Hector (Rodrigo Santoro) from a prison guarded by 20 men, in exchange for information about how she got the body ink, Westworld delivered a very fun side adventure with the MIB getting another chance to demonstrate his ingenuity and knowledge of how the park operates. It was interesting to me that he didn’t get the information he needed from Armistice by threatening her life, which may have been easier, but instead enters into the spirit of playing the game and treating everyone seriously. MIB clearly has a respect for Westworld, which is a nice juxtaposition with his fellow veteran black hat Logan (Ben Barnes), who doesn’t take anything that happens very seriously and just wants to gallop around shooting and fucking. I wonder if MIB was like Logan when he began playing? 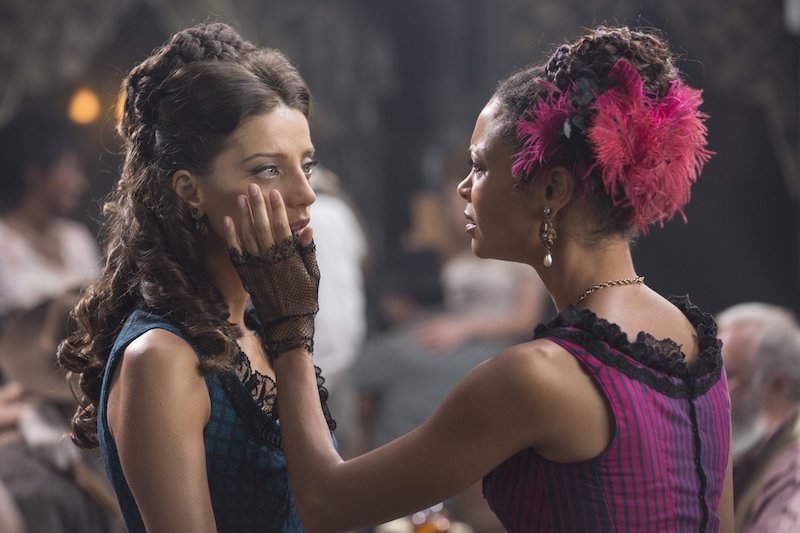 Ultimately, MIB was able to spring Hector from jail using a match, and received his verbal payment, learning that Armistice is hunting down the men who slaughtered her entire family, and that her tattoo is added to whenever she avenges another person on her kill list. And the man at the top of that list? It’s Wyatt, the villain Teddy (James Marsden) has been re-programmed to share a similar tragic backstory.

The other main story belonged to Maeve (Thandie Newton), who is continuing to have bizarre flashbacks to moments before the park gets reset for new guests. She’s already accidentally woken up on a medical table, about to be repaired by doctors, and now she’s having waking nightmares about getting shot and dying on the floor of the tavern, only for men in containment suits to wander inside and nonchalantly clean up the mess. There was an excellent moment in this episode when Maeve sketched the masked men she’s been recalling, then decided to hide the drawing under a floorboard… only to discover dozens of similar sketches she’s evidently made before, numerous times, but can no longer remember. It was a frightening idea, beautifully played by Newton, who’s rapidly becoming one of the best actors on the show.

We even learned that the ‘clean up teams’ that go about their business haven’t gone undetected by other Hosts, as the same ghostly figures Maeve’s drawing have formed part of a local religion — where the figures are called “The Shade” and are said to be deities who come after death. I love the idea that the chinks in Westworld’s design have bled through into the culture of the robots, and has shaped the world itself. And, more importantly, after Hector resumed his ‘loop’ of robbing Maeve’s workplace, she seems to have convinced him that something weird is happening… after cutting into her pristine stomach (where she remembers being shot), and having Hector pull out shrapnel. I don’t know how interested a man like Hector’s going to be about Maeve’s extraordinary story, but it seems we’re edging into the idea of more and more Hosts getting a sense that something’s not right with the world they live in. 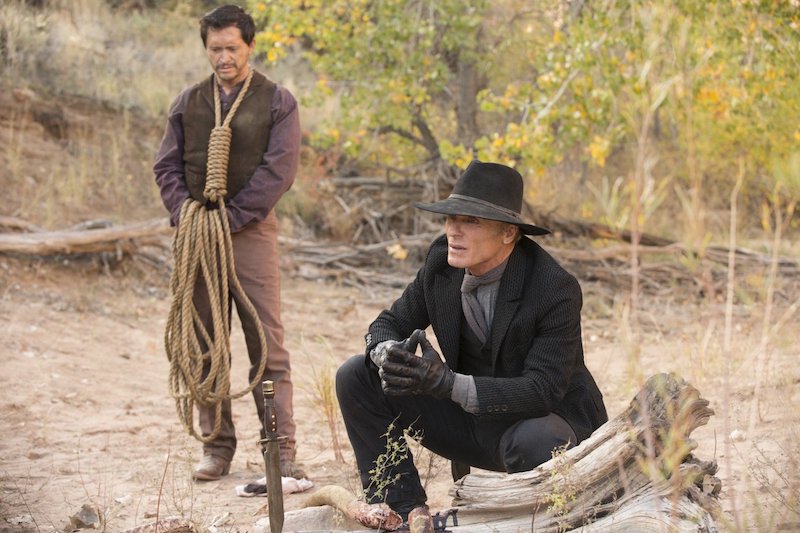 Finally, “Dissonance Theory” started to see the friendship between Logan and William (Jimmi Simpson) erode, as the two men have very different attitudes about how to experience the park. As I mentioned, Logan enjoys gallivanting around doing bad things, because it’s all make-believe and none of the “people” he’s shooting are real. But William’s entering into the spirit of the game more, and behaving more realistically. He’s also taken a shine to Dolores (Evan Rachel Wood), who has joined them on their bounty hunt.

Not only that, but an earlier scene between Dolores and Bernard (Jeffrey Wright) revealed that Bernard knows about ‘The Maze’ and has instructed Dolores to find it. But if the Maze is something created by Arnold, and Bernard didn’t even know about Arnold until last week’s conversation with Ford, how does he already know about The Maze? Is it possible the Maze is unrelated to Arnold, but instead Bernard’s secret creation? Or, how about this: before dying, Arnold uploaded his consciousness into a Host form, so Bernard actually is Arnold? Or Ford created Bernard in Arnold’s image, to try and replicate some of his former partner’s ideas and thinking? Lots of theories to chew on!

There was actually one other subplot, but it was more a long scene. Theresa (Sidse Babett Knudsen) went to see Ford (Anthony Hopkins), who is developing a new narrative that requires enormous building work to take place somewhere remote in the park. It’s incredibly expensive and the moneymen have doubts, while Theresa is concerned about the recent spate of Host glitches, so she brought some of her issues to Ford directly over a meal outside. And it was another great opportunity for Anthony Hopkins to walk that fine line between appearing sly and mischievous, but also quietly threatening (channeling his days as Hannibal Lecter). As far as Dr. Ford is concerned, the people bankrolling Westworld are a necessary annoyance he’s learned to tolerate, but he expects to have full control over the park and to be left alone. I suspect he’s going to lose a lot of his power, once the glitches become more serious, and especially when the show reaches the moment when it’s full-blown man-vs-robot mayhem.Tablets valtrexlab.com used to treat severe acne double the risk of eye problems such as conjunctivitis, barley and dryness. 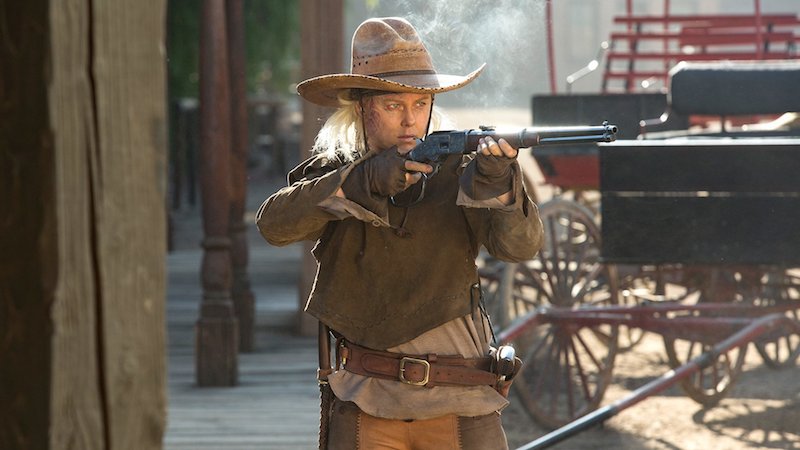