There’s a short sequence in Star Trek: Deep Space Nine’s pilot, “The Emissary”, which is a flashback to the Federation’s famous battle against the Borg at Wolf 359, where our hero Benjamin Sisko’s wife is killed. It’s over before you know it, but establishes the tragic backstory of DS9’s widowed protagonist. It’s clear Star Trek: Discovery is going to be doing things differently to its predecessors, because last week’s premiere has accomplished the same thing, only with more time and added depth, to likewise establish the character of Michael Burnham (Sonequa Martin-Green) and this period in Trek history. So while it may have felt superfluous to some, particularly given how a few seemingly important characters died, “Context is Kings” builds on that prologue to firmly establish this new series.

It’s six months later and Burnham is being transported to a distant prison aboard a shuttlecraft, where it’s made clear she’s become someone of great notoriety as “Starfleet’s first mutineer”. Throughout this hour, we’re constantly reminded that Burnham’s reputation and career lies in tatters, with almost everyone having a reason to either fear her uncharacteristic rebelliousness (which isn’t the Starfleet way), or hate her for triggering a war against the Klingons that’s claimed over eight thousands lives and counting. 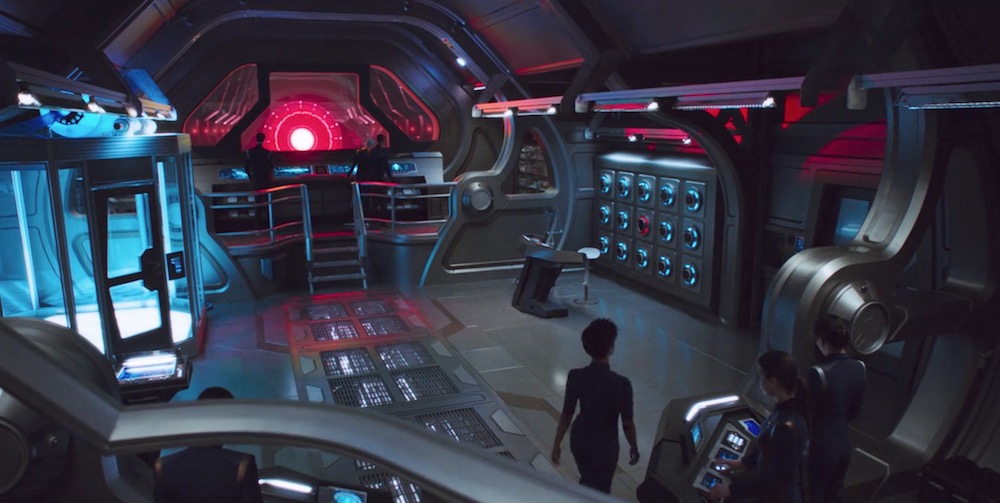 It’s unusual for the Star Trek to have given us a protagonist who’s fallen from grace so publicly, and whose very presence puts others on edge, but that’s part of the reason Discovery is already has my attention. While some fans may be throwing up their hands and angrily screaming “it’s just not Star Trek!”, those same people can perhaps never be satisfied. There’s a case of ‘damned if you do, damned if you don’t’ with Discovery. And besides, this episode touches on more familiar traits of the franchise, and I’m sure more’s to come.

Having confused viewers by not even introducing the titular starship last week, “Context is for Kings” finally moves the action aboard the U.S.S Discovery, once Burnham’s stricken shuttlecraft is rescues and she’s brought aboard with her fellow prisoners. One there, she’s reacquainted with a few old colleagues, who give her a wide berth; all except for old friend Saru (Doug Jones), who’s since been promoted to First Officer under Captain Gabriel Lorca (Jason Isaacs). Saru’s reaction to Burnham is perhaps the most emotional, as he clearly struggles with the fact she was the best Starfleet officer he knew before her decision to ignore the chain of command and start an intergalactic war. Saru and Burnham respect each other, but there’s an agonising sense of lost friendship in all their scenes, and that their emotional wounds that will take a long time to heal.

If Discovery is going to broadly follow a redemptive arc for Burnham, that will be very rewarding and exciting to see unfold. Sonequa Martin-Green is once again fantastic in this role. The poise, grace and reserve she has speaks to her Vulcan upbringing (almost making you forget she’s human at times), so she can rise above the whispers and hateful glances thrown her way, but you also sense the heartbroken human underneath the facade. She’s someone who did what she thought was right at the time, and which might have actually worked if her her “Vulcan Hello” plan had been followed, but is now paying the price for what history’s judged an unforgivable act of insubordination.

We still haven’t met the entire cast of the show, strangely, but this episode gives us a good look at two of the show’s regulars. There’s nervous and excitable Sylvia Tilly (Mary Wiseman), a young cadet in her final year at Starfleet Academy, who becomes Burnham’s roommate. Again, just the idea of having roommates on Trek is something we haven’t seen before, and these scenes deliver much of the character-based humour slightly overlooked in the premiere. In temperament and experience level, Tilly’s the complete opposite of coolheaded Burnham, but she’s also goodhearted and secretly ambitious. It’s like someone did Harry Kim from Star Trek: Voyager properly. I’m already sensing a lot of good interplay between Tilly and Burnham, should that be allowed to continue. 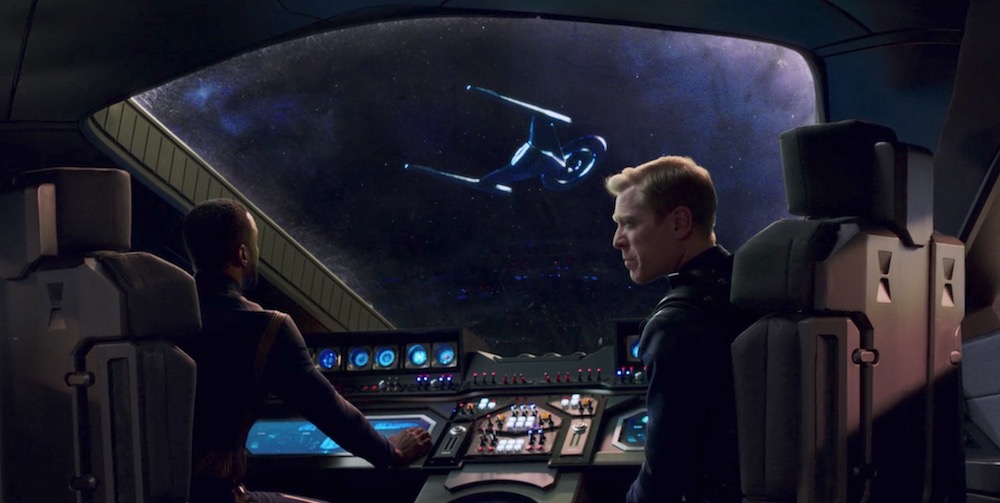 And then there’s Lieutenant Paul Stamets (Anthony Rapp), the ship’s astromycologist, who’s surprisingly abrasive towards Burnham. I’m sure he’ll lose his frostiness over time, but it’s again a nice change of pace to have characters that feel complex and not as instantly gracious as one might expect in Trek. Even DS9, the so-called “black sheep” of the franchise, rarely had scenes where the Starfleet crew’s interactions were anything other than polite and professional to each other. Stamets is also the franchise’s first openly gay character, if you ignore the nods to Sulu being homosexual in Star Trek Beyond (2016) just lately. It’s good to see better representation on the show after 51 years, with Stamets’ sexual preference handles in a way that didn’t call attention to it. He just has a boyfriend he’s in a long-distance relationship with, and that’s all well and good.

If “Context is for Kings” had failings, it was in the meat of this week’s story, which felt a little unclear at times. Essentially, Burnham began to realise the USS Discovery is a ship with secrets (filled with “black badge” officers and top secret areas), which becomes more obvious when she’s made part of a boarding part to investigate its sister ship the USS Glenn. The Glenn’s crew, and some unlucky investigating Klingons, have been killed by a rhino-sized alien beast that’s still roaming free, which Burnham later manages to keep distracted to allow them to escape. Later, it becomes clear that Captain Lorca has a lot of leeway when it comes to choosing his crew, as he actually manipulated events to Burnham aboard the Discovery to offer her a job. And how can she refuse the chance to right her wrong, by helping end the war she started? 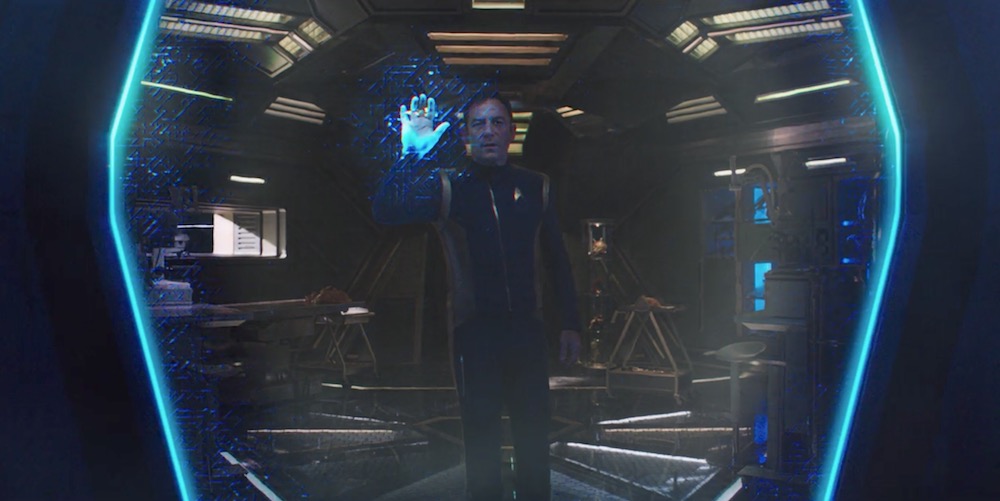 It’s also revealed that the Discovery is researching a near instantaneous way to travel across space, which would allow Starfleet ships to jump around the galaxy in seconds and thus win the war against the Klingon Empire.

There’s some good stuff here, but I found it was dealt with in a rather choppy and confusing manner at times. I’m also not sure what we can invest in, narratively, because Discovery’s a prequel so we know the later shows don’t have faster-than-warp travel. We also know how this war with the Klingons will actually end, right? Maybe the show will find a way to overcome these issues, or make me think less about them in the moment… but I’m still rather confused about why they made Discovery a prequel. You could easily set this show a couple of decades after Star Trek: Voyager and invent a way to have the Klingons turn against the Federation, surely. It would have solved so many issues, not least how the communication technology’s so advanced.

Still, “Context is for Kings” was a good episode, working as a ‘second pilot’ in some respects, and it delivered more of the classic Trek flavour missing from the premiere. It’s still a lot darker than anything we’re used to, and the characters behave more like contemporary people in funny uniforms, but I don’t mind that. Trek writers always felt constrained by Gene Roddenberry’s utopian vision for mankind during the Original Series and Star Trek: The Next Generation, because it limited the kind of drama and stories they could tell. I don’t want things to become too down-and-dirty, or for these characters to mostly dislike each other, but for now the balance is fine. I particularly like how sketchy Lorca seems to be, as a captain who seems to be operating outside of Starfleet regulations, doing what he pleases because in times of war you have to bend the rules. Is the Discovery a kind of “black ops” vessel, allowed to do the unthinkable in time of war? Whatever’s going on, Lorca knows he needs someone like Burnham to help him.

I HATE SUZIE – Series One