A great magic trick is all about misdirection. While many had spotted the groundwork going into Star Trek: Discovery’s mid-season twist (that Ash Tyler is actually Voq), most people missed the second one “Vaulting Ambition” unleashed. Captain Lorca (Jason Isaacs) is actually from the Mirror Universe, so his questionable morals weren’t because he’s a tough Starfleet officer doing whatever’s necessary to win a war, it’s because he’s part of the fascistic Terran Empire and naturally bellicose. There was even a clue hidden in plain sight, ironically, because Lorca’s aversion to bright light is a common issue Mirror folk suffer from in the Prime Universe. Although that wasn’t common knowledge until now, so you’re forgiven for thinking it was a weird quirk the writers added to make hard-faced Lorca seem privately fragile.

I never gave serious thought to the possibility Lorca wasn’t from our universe, although I heard it mentioned as a wild theory a few weeks ago when someone noted Lorca’s the kind of no-nonsense guy who could feel at home amongst the Terrans. In retrospect, it makes sense of why he was keen to recruit Burnham (Sonequa Martin-Green) and ultimately manipulate events so the USS Discovery would take him home. Once we’re told Mirror-Lorca was an adoptive father figure for Mirror-Burnham, before becoming lovers, that puts a quasi-incestuous spin on their dynamic. But there was never any sexual undercurrent to scenes between Lorca and our Burnham, which one might have expected to see given Lorca’s backstory. My guess is that particular wrinkle was decided on later in the game, for maximum ickiness. 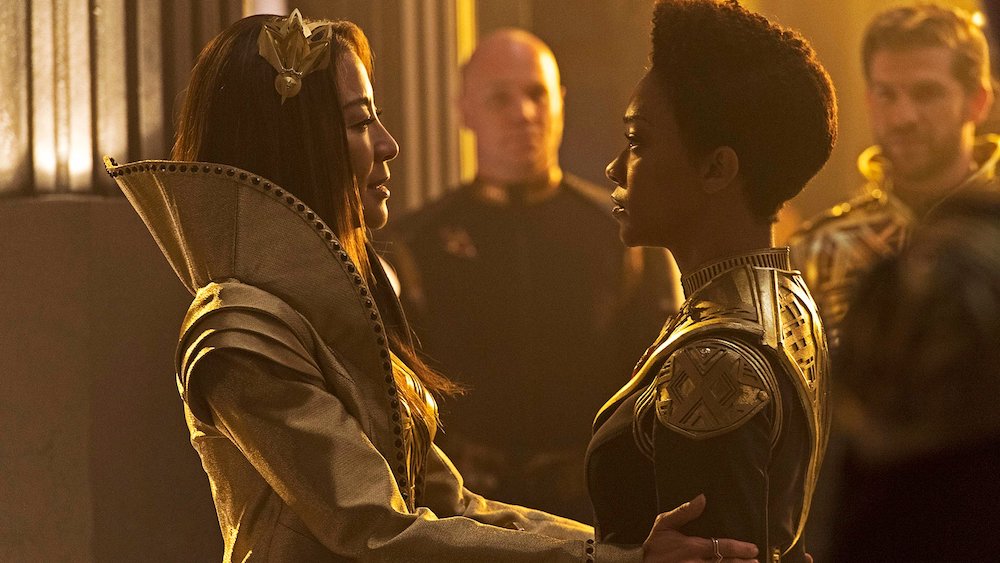 “Vaulting Ambition” was mostly memorable for the interactions between Burnham and Mirror-Georgiou (Michelle Yeoh), who in this universe isn’t dead and is the Terran’s foreboding Emperor, complete with enormous palatial starship the ISS Charon (named after the ferryman of Hades who delivered souls across the rivers Styx and Acheron in Greek mythology). It always felt like a shame, perhaps even a huge mistake, to lose Captain Georgiou after Discovery’s two-part premiere did such an effective job selling us on the mother-daughter relationship she had with Burnham. So it was nice to see Yeoh back on the show, even if this was clearly not the same levelheaded character we enjoyed getting to know twelve episodes ago.

And kudos to the writers for making the Mirror Universe feel so unpleasant and frightening in its distorted ideals. A dinner scene where Burnham had to join Georgiou in eating parts of a dead Kelpien like it was a delicacy. That was gross, and I’m keen for Saru (Doug Jones) to lead some kind of uprising for his enslaved species. If there’s time for that, as I’m unsure if we’ll be spending the rest of the season in Mirror-land, or just another episode or two.

Things took an interesting turn when Emperor Georgiou smelled a rat with Burnham and ordered her execution, which then forced her “daughter” to explain she comes from a different universe. There was even a Guardians of the Galaxy (2014) nod to Yondu, with Georgiou’s flying disc arcing around her throne room, punching through a dozen of her crewmen’s heads because they had overheard Burnham’s confession. 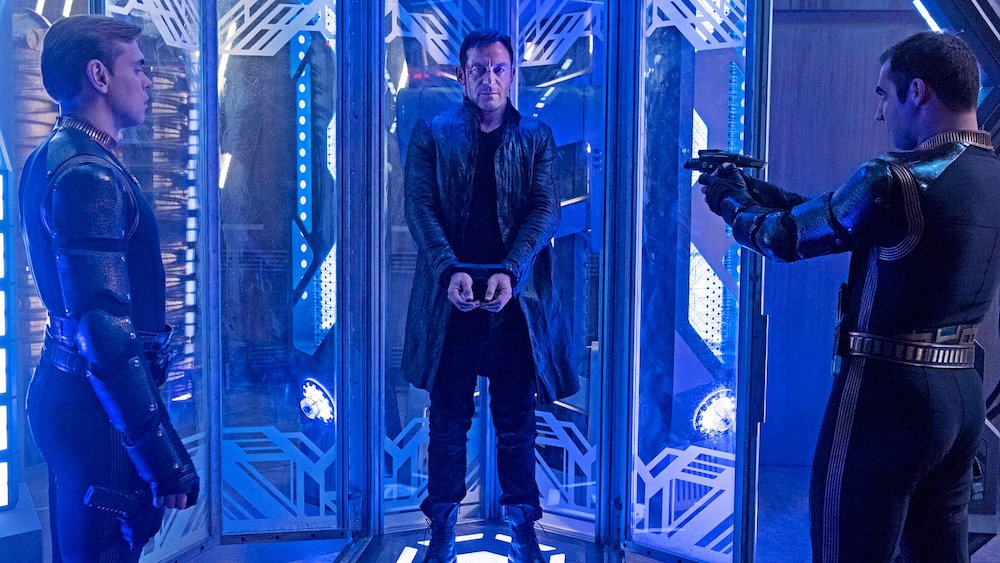 The confused situation with Tyler (Shazad Latif) was explained a little more, but now seems to be even more far-fetched. I could accept that L’Rell (Mary Chieffo) helped transform Voq into a human who resembled Starfleet’s Ash Tyler, but this always lead to a simple question: where did the real Ash Tyler go? The answer was odd, because L’Rell explains the Klingons captured Ash during the Battle of the Binary Stars and then grafted his DNA onto Voq. Or something. I’m none the wiser, because Voq’s body was clearly surgically altered to look like Ash Tyler, so where is the real Ash? It seems a stretch to suggest you can harvest a person’s DNA and it will contain the memories of that person, which Voq must have to be able to pass as Ash convincingly. I know this happens in sci-fi quite a lot (Alien: Resurrection springs to mind), but Trek’s smarter than that, right?

Stamets (Anthony Rapp) also got a significant subplot, which was very familiar because Trek’s done countless variations on characters finding themselves in strange versions of their own ship. Here, Stamets has managed to access the mycelial network with his consciousness, where he met one of his alternates who is likewise trapped there. The spore-verse is also being slowly destroyed because Mirror-Stamets corrupted it with his own experiments, and the Discovery’s spore garden has already been blighted. It seems they’re losing the only way to ever leave the Mirror Universe, so Stamets will have to come up with a way to get the spores back to full health. 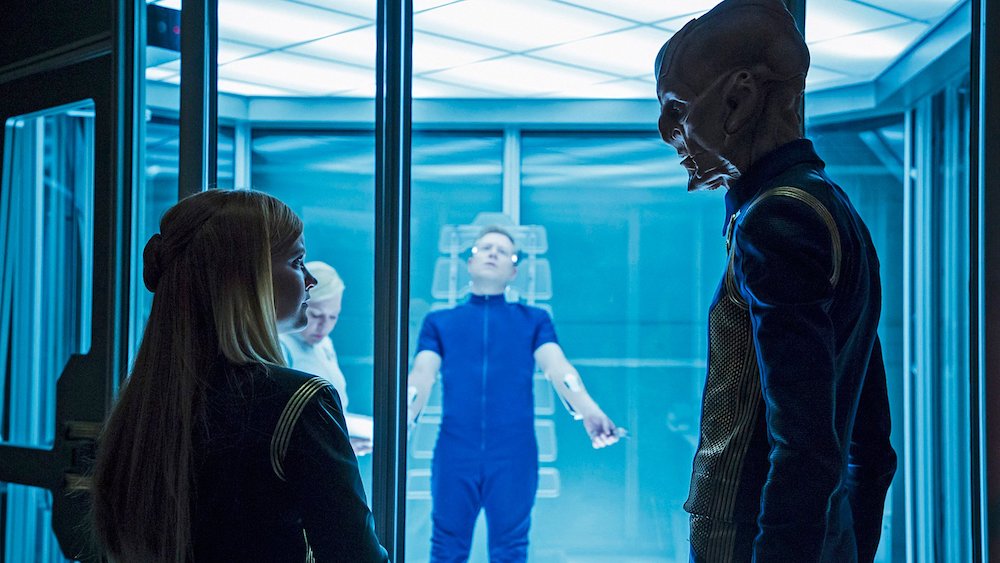 This storyline was also used to give Dr. Culber (Wilson Cruz) a better farewell, after Ash snapped his neck last week, but there was scant explanation for why his consciousness has become stuck in the mycelial network. It just seemed like a poorly thought out way for Stamets to interact with his dead boyfriend and tug at the heart strings, but even that fell rather flat because the relationship they have is largely conceptual right now. It’s great that Star Trek have a gay couple that are so prominent on the show, but do I feel anything for them together? Not especially.

As we approach the end of the first season, my thoughts on Star Trek: Discovery continue to ebb and flow. It seems to have been over-engineered to service plot twists, at the expense of putting in the necessary work to make us care for these characters. I don’t hate anyone, but Burnham’s distant by nature, Lorca’s edgy personality was due to him being an enemy (who may not last the season as a result?), likeable Ash was similarly a villain hiding in plain sight, Stamets has a prickly personality, Tilly (Mary Wiseman) and especially Dr. Culber haven’t been given much to do, and that leaves Saru as the sole character who seems to fit in a Star Trek show. The excursion into the Mirror Universe has been welcome, because Discovery has quickly become fun but edgy in a similar way to Star Trek: Deep Space Nine, but it still really needs to drill down these characters to make us care more.