It’s The Towering Inferno (1974) meets Die Hard (1988), only from the writer-director of DodgeBall: A True Underdog Story (2004) and Central Intelligence (2016). So, yeah. Skyscraper concerns Will Sawyer (Dwayne Johnson), a former FBI hostage negotiator who lost a leg when a situation went wrong, who then became a security assessor for skyscrapers. He’s hired by Chinese billionaire Zhao Long Ji (Chin Han) to cast his expert eye over the tallest building in the world, ‘The Pearl’, so brings his family over to Hong Kong for the inspection—wife Sarah (a good Neve Campbell) and their twins (McKenna Roberts, Noah Cottrell). While in town, he gets reacquainted with his old Bureau buddy Ben (Pablo Schreiber), then finds himself embroiled in a plot by international terrorists to burn The Pearl to the ground in pursuit of something in Zhao’s possession.

Skyscraper sounds like it can’t fail, as it’s combining the ingredients of a classic disaster movie with a similar situation Bruce Willis faced in Die Hard. Only it’s a touch more modern with higher stakes because the hero’s own children are in direct jeopardy. It also has the benefit of 2018 digital effects, which do a commendable job selling the idea this is all really happening in and around a real building. Will is even given a literal disability with a prosthetic leg, making him more sympathetic and lending some element of doubt over whether or not “The Rock” can save the day. I mean, he will of course, but whenever Will loses his leg (which with some regularity) you’re slightly more likely to grit your teeth. Or shake your head in amusement, as it becomes a multi-purpose weapon of choice. 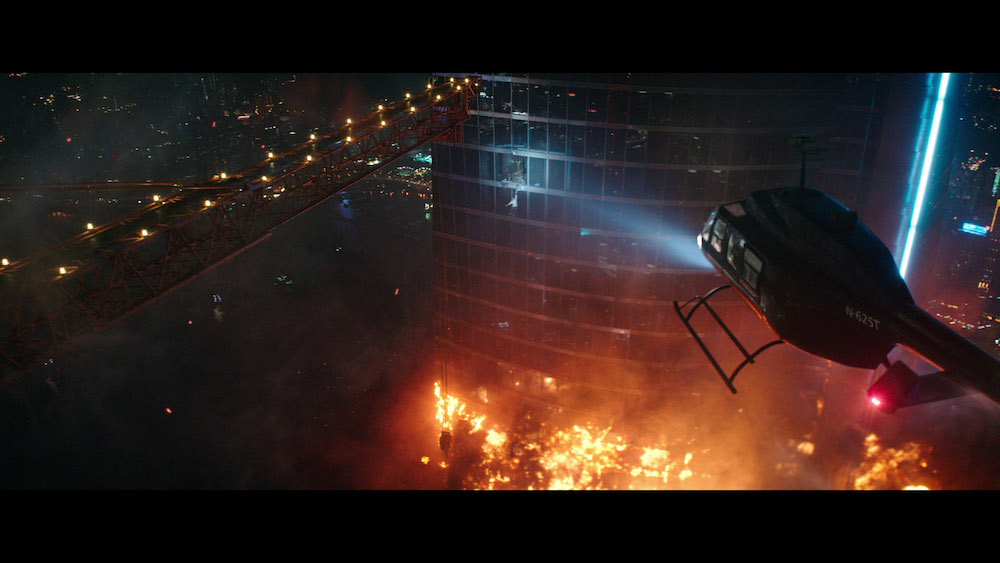 Unfortunately, this $125M movie is indebted to the films that inspired it, but only in conceptual terms. It doesn’t get the basics right. Dwayne Johnson is a good action star and he puts in an above-average performance here, clearing seeing Skyscraper as a chance to do something with less of a knowing wink to the audience, but his character is a two-dimensional superman. The fact he’s a tough guy family man and amputee is his entire characterisation, with Johnson’s natural charisma doing its best to paper over the cracks.

Frustratingly, things are a lot better whenever he’s interacting with Pablo Schreiber, but their dynamic doesn’t last long before we’re focused on Will and his single-minded family rescue from a burning building full of terrorists.

Perhaps the biggest problem with Skyscraper is the lack of a strong and nuanced villain, although Kores Botha (Atomic Blonde’s Roland Møller) looks creepy and does get a few skin-crawling moments. It’s just that his reasons for destroying The Pearl and his ultimate goal isn’t that interesting, and there’s a clear lack of any cat-and-mouse games between him and Will. 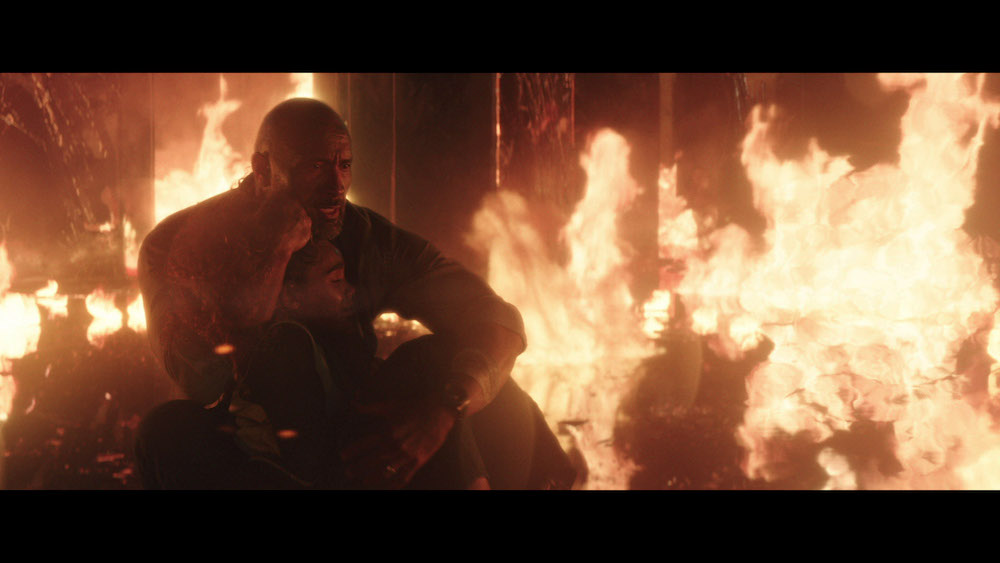 Maybe that was intentional because the script is already evoking Die Hard too much, but without a strong connection between hero and villain, Skyscraper never quite comes together. The disaster heroism isn’t too bad, for a while, but it all gets a little humdrum when it should be getting more tense and exciting. It doesn’t help that the building is almost empty when it’s set on fire, so there are no supporting characters to get to know and mourn. The story also failed to get me hooked into the underlying situation and make me eager to see Will help Zhao defeat Botha.

This is a movie that feels like it’s going to be B Movie nonsense because The Pearl is introduced as a ludicrous ‘Burj Khalifa on steroids’ construction (it even has its own ‘holodeck’ and an indoor waterfall), but things are played oddly straight. The movie famously reshot a shot of Johnson jumping from a nearby crane into the blazing building, because test audiences thought the distance between the two was unbelievable, and it seems the whole movie backed away from being as fun and silly as possible.

But when you can’t deliver the goods with a more down-to-earth Die Hard rip-off, it’s a pity Rawson Marshall Thurber didn’t lean into the preposterousness of the mildly futuristic location a little more. 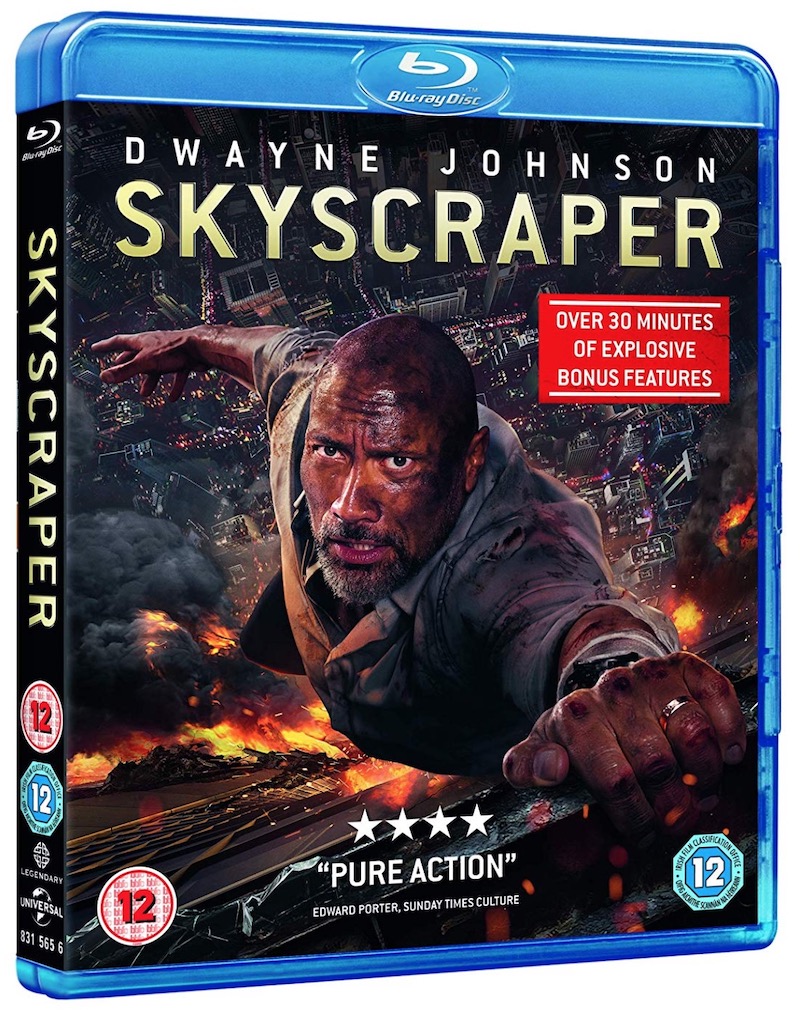 Skyscraper was shot on Arri Alexa cameras and the 1080p Blu-ray of the 2.40:1 ratio image is clean with good detail levels. The image can be a little soft at times, usually when there are digital effects being added, and the black levels are a little disappointing at times, but the suffused colour palette is nicely represented and there isn’t much post-production grading. I couldn’t sample the 4K Ultra HD release but suspect it benefits from HDR and undoubtedly the Dolby Vision will help fine-tune the movie’s generally dark aesthetic.

There’s a Dolby Atmos 7.1 soundtrack for Skyscraper on the Blu-ray and 4K UHD discs, which will deliver the best home theatre aural experience. There are plenty of booming explosions to give your subwoofer a decent workout, together with plenty of scenes involving helicopters whirling overhead, or a sudden hail of bullets spewing from the rear channels. The downmixed Dolby True HD 7.1 track is no slouch either, but Atmos is a considerably meatier soundstage, with the clarity of dialogue maintained throughout.