Is it unfair to compare this latest adaptation of Shakespeare’s Macbeth to past film adaptations of the play? Each director must find their own way with the text, and this has resulted in three very different and very strong adaptations in the past. First came Orson Welles, a director who made two better Shakespeare adaptations in his life (1952’s Othello, 1965’s Chimes at Midnight). Next, Akira Kurosawa picked up Macbeth and dropped it in feudal Japan for 1957’s Throne of Blood. And then there was Roman Polanski’s feverishly paranoid masterpiece from 1971. Each adaptation is coherent, thrilling, and typical of its director—Polanski’s being the greatest of them all, and the best Shakespeare adaptation ever made.

You might well argue that it’s unfair to compare Justin Kurzel’s Macbeth to its predecessors. But it’s also inevitable. And, unfortunately, this one won’t be troubling the others for top spot in most people’s affections. Its ambition cannot be questioned, though its insistence on monotone delivery and endless tedium certainly should be. Kurzel’s Macbeth is about half an hour shorter than Polanski’s. It doesn’t feel it. 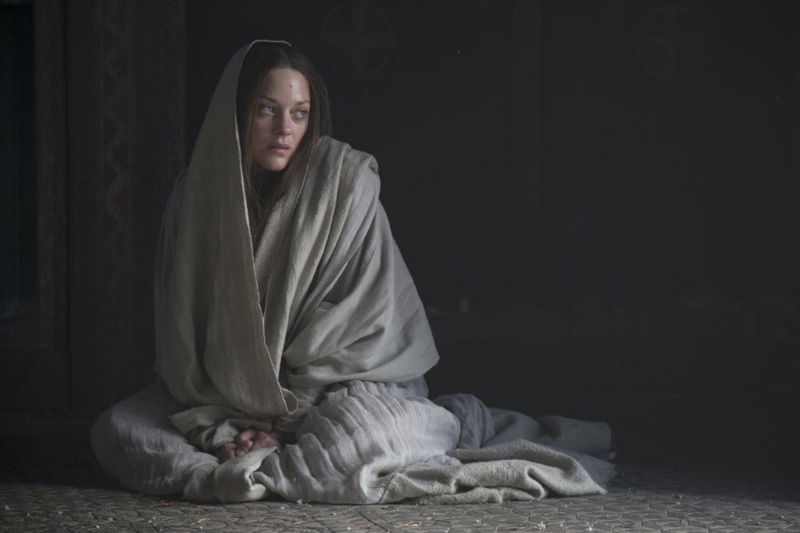 One of the most notable changes made by the writers (Jacob Koskoff, Michael Lesslie and Todd Louiso) is the opening that sees Macbeth (Michael Fassbender) and Lady Macbeth (Marion Cotillard) standing over their dead child. Lying lifeless on the ground, this deceased child and its mourning parents immediately takes the Scottish play in a new direction entirely. The death of a son is an event that must necessarily echo through every act of violence and lunge for power the pair will later revel in. Or one of them, at least. Here, the strange decision is made to make Lady Macbeth a little less complicit in what happens, to lend her some vulnerability. It’s an idea that ties into the decision to bring in the death of a child, but it’s not one that fully pays off. As a result, Marion Cotillard—one of the film’s great assets—is handed little more than a bit part. Utterly captivating in every scene in which she appears, it’s hard not to imagine what she would have done with a full-blooded femme fatale Lady Macbeth. 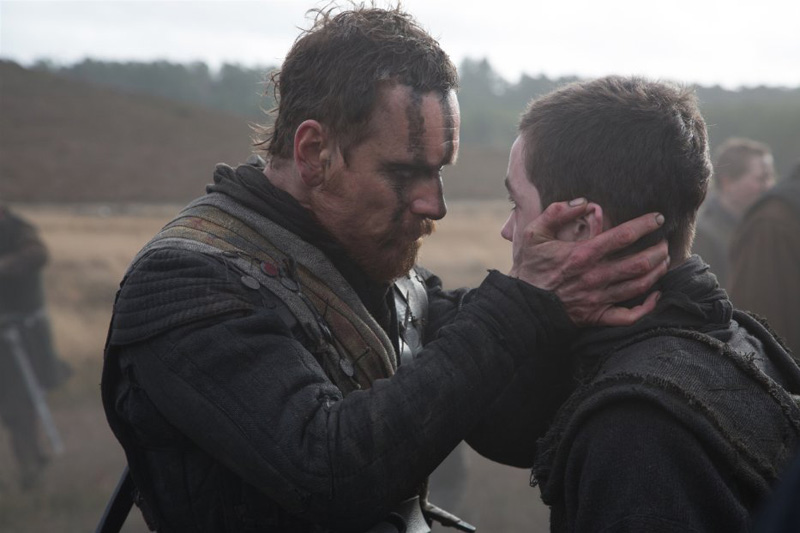 Fassbender rarely gives an inch, delivering almost every word in the same tone of voice. And when his tone does fluctuate, he jumps straight to shouting and then reverts to muttering. That’s not to criticise his acting, as such, which is clearly what the director is demanding from him. The trauma of battle is supposed to have hardened Macbeth, rendering him laconic with occasional fits of rage. Many of Shakespeare’s greatest lines—words that have been delivered and made poetic by many a great actor—are left to flop out of Macbeth’s mouth and into the puddles of dirty water he spends half his time standing in. No amount of misty moors is going to atone for the sin of making Shakespeare dull and lifeless. 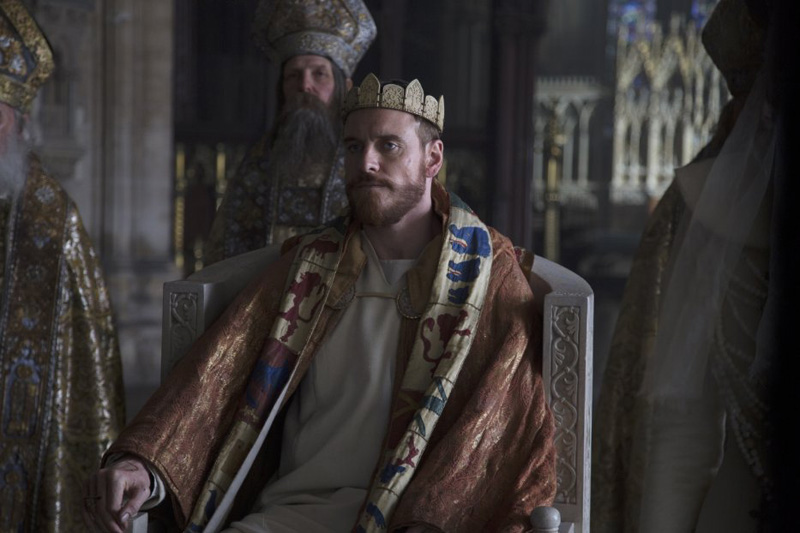 Macbeth first spots the prophetic witches—who will tell of his rise, first to Thane of Cawdor, and then King of Scotland—on the horizon, through the mist hanging over a battlefield. One of the most interesting visual techniques Kuzel employs is allowing characters to get lost in the mess of the frame. It takes the viewer as long to see who’s heading Macbeth’s way as it takes the battle weary Macbeth himself to realise. The general confusion and volatility of the scenario is extended to the movement of the camera: it bows and flails and swings in the breeze. It adheres to the words spoken by Macbeth:

Life’s but a walking shadow, a poor player. That struts and frets his hour upon the stage. And then is heard no more: it is a tale. Told by an idiot, full of sound and fury. Signifying nothing.

The at times balletic camerawork is one of the film’s most commendable features; only it’s spoiled when either Macbeth speaks, or we’re otherwise reminded of the film’s dreary tone. 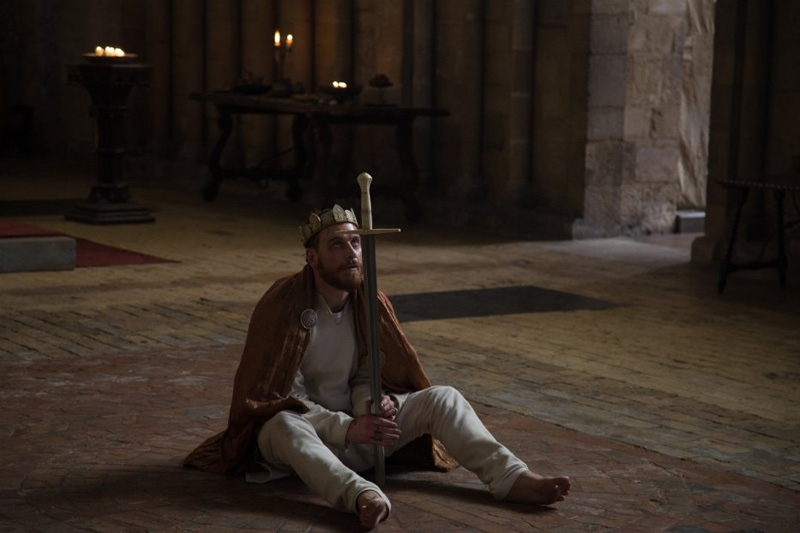 After Macbeth has ordered the murder of Banquo (Paddy Considine) and his son (Lochlann Harris), the scene in which Macbeth loses it in front of his subjects—thinking he sees Banquo’s ghost sitting at the dinner table—is stolen by Cotillard. Here she shows what’s possible, and the dimension offered to the character by her also being a grieving mother pays off. She lends her lines a sad yet maternal poignancy; the film would’ve benefited greatly for a few more scenes like it.

The battle scenes are suitably bloody and violent, but we’d expect nothing less nowadays. When Macbeth is tearing into his opponents in slow motion, with blood spurting this way and that, all is well. Those ecstatic periods of bloodletting, however, have to make way for exposition and dialogue. It’s how these scenes are dealt with that bring us crashing back down to earth; each of those scenes more deadening than the one before. There is no way to be complimentary about the pacing because it’s all over the place, to put it kindly. The fact solemn glances and shots held for slightly too long don’t translate into emotional weight is a lesson hard-learned by many filmmakers.

There’s nothing necessarily wrong with Kurzel wanting to present a stripped back riff on Macbeth. But so much is condensed and so many pleasures denied, that what we’re supposed to be getting out of this exercise in cinematography and laconic storytelling is entirely unclear. The interesting deviations from past adaptations never feel enough to pull Macbeth out of the hole the filmmakers have dug for it.