The second Matthew Vaughn film about a group of youngsters taught to develop their skills and harness their potential (after X-Men: First Class), Kingsman: The Secret Service finds the Kick-Ass director adapting another Mark Millar comic—as foundation for a ‘Bond on acid’ adventure that makes Moonraker look like The 39 Steps.

Harry Hart (Colin Firth) is “Galahad”, a gentleman spy belonging to top-secret organisation ‘Kingsman’, who promised to help the half-orphaned child of a murdered agent he owes his life to. The teenage Eggsy’s (Taron Egerton) become a council estate brat, lost without a father figure, so has turned to a life of crime. That’s until Harry returns to bail him out of jail, and offer Eggsy the chance to enrol in Kingsman’s elite training—to replace “Lancelot” (Jack Davenport), an agent bisected by the razor-sharp leg blades of assassin Gazelle (Sofia Boutella). 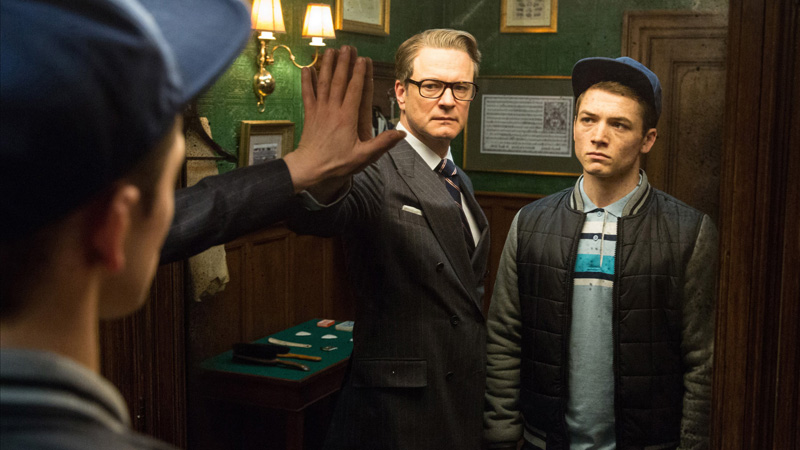 There follows obligatory ‘agent-in-training’ sequences (reminding me of those from Ender’s Game), which prove entertaining until they threaten to fill the entire movie, despite there being little doubt Eggsy’s going to be wearing a Savile Row suit and Harry Palmer’s spectacles come the finale. Speaking of whom, Michael Caine himself plays Kingsman leader “Arthur”, because the cycle of sending up his early Ipcress File role has come back around since Austin Powers in Goldmember.

Kingsman‘s the kind of film that’s ideal for a beer-n’-pizza night, but you feel the weight of its flaws piling up. And when it’s over you realise there wasn’t enough substance to lure you back, just a handful of Kill Bill-y fights. Colin Firth’s a scene-stealer throughout, however, in a role that’s effectively The Avengers‘s John Steed after a thousand Krav Maga lessons. The former Mr Darcy gets Kingsman‘s two best action sequences to himself, although both feature a tonne of digital stuntmen that occasionally lose the thrills to the depths of the uncanny valley. Vaughn’s sensibilities, at least with Millar’s source material, is to create colourful live-action cartoons. Outrageousness is their defining quality (remember potty-mouthed Hit Girl?), which is fine, to a point, but it’s excessively done in Kingsman. 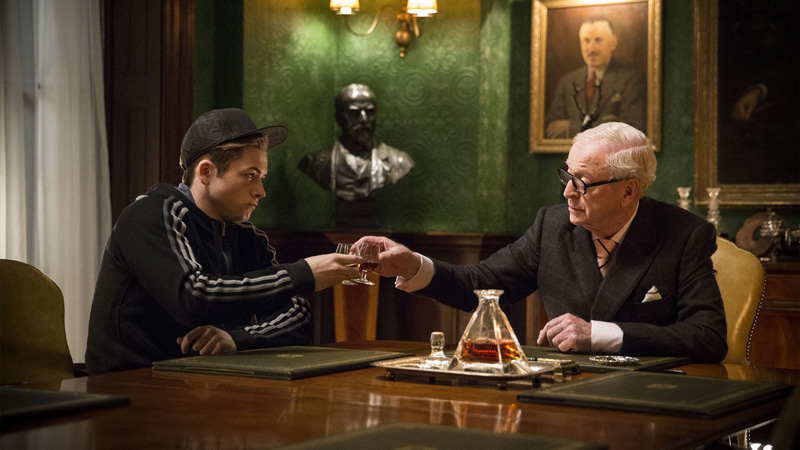 Worse, there’s a palpable misogyny that runs through the sory that doesn’t feel like a knowing wink to the early Bond films and how they mistreated women. Eggsy’s mum (Samantha Womack) is a hot mess, the only girl in Kingsman training is shunted aside during the finale (sent into the stratosphere while the men “take care of business”), and Arthur’s table is conspicuously absent of a “Guinevere”, no? Gazelle’s a notable exception, but she’s little more than a whirling dervish to gawp at.

And yet, for all its faults, Kingsman is an energetic and colourful spectacle that’s difficult to hate. It’s also a rare glimpse of the kind of pop-art films Britain might be making if it the film capital of the world was Wood Green, not Hollywood—seeing as the core talent’s homegrown, and an American plays the hammy villain (lisping Samuel L. Jackson as tech guru Valentine). The UK doesn’t have many post-1940s cultural boroughs that lend themselves to modern blockbuster sensibilities (espionage thrillers are largely it), so it’s undeniable fun to see Vaughn tackle one in a way that’s so bracing and invigorating. It’s just a shame so much of Kingsman leaves a bitter taste in your mouth, when the beer cans have been crushed and the pizza boxes lay bare.