A while ago, I chimed in on a Facebook debate among friends about whether Anthony Hopkins or Mads Mikkelsen is the better Hannibal Lecter (I don’t recall any Brian Cox loyalists weighing in). I argued that the two actors are essentially playing different characters; not only because of the differences between episodic and feature storytelling, or the drastically different stylistic approaches Jonathan Demme and Bryan Fuller have taken with the character. Hopkins’ performance is much broader than Mikkelsen’s subtle, chilling version of Dr. Lecter; the character’s self-conscious theatricality makes sense, as he’s deliberately living up to his reputation in his initial scenes with Clarice Starling (Hopkins drastically scales back the “fava beans” mugging in later scenes with Jodie Foster, when Lecter has grown to respect Clarice).

The comparative restraint in Mikkelsen’s performance makes total sense, as, until this season, he’s been playing a character whose “human suit” masked his monstrous qualities. One of the most fascinating things about this season has been seeing the character evolve into the Lecter we’re more familiar with—I’m not saying Mads should start aping Hopkins’ ‘HAL 9000 meets Katharine Hepburn’ take on the character, but the seeming inevitability of Hannibal’s capture in the next few episodes makes me anxious to see where he and the show’s writers go from here. 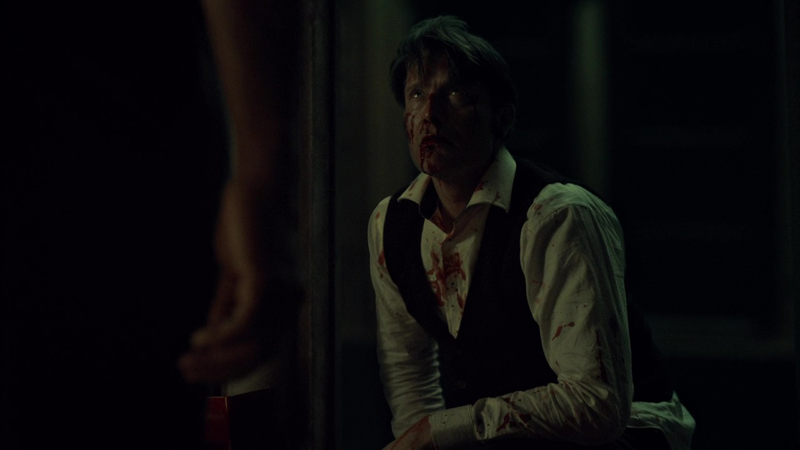 We got a glimpse of what this might look like in the moments before the climactic confrontation of “Contorno”, as Hannibal deliberately toyed with Jack Crawford (Laurence Fishburne) by offering his sympathies on the death of Jack’s wife. Hannibal was Jack’s friend before he met Will and seemed to have a genuine soft spot for Bella, so his condolences aren’t entirely disingenuous—but as he questions whether Jack gave his wife the merciful death she wanted, we see the Hannibal who, without the need to hide his true self, is much more transparently manipulative. He’s playing the role of the villain, although it doesn’t save him from a merciless beatdown that he barely escapes from with his life.

I must admit, it gives me an inappropriate amount of satisfaction to see Fishburne and Mikkelsen beat the bejesus out of each other, and their fight scene here matches the one that bookended last season (scoring the scene with “Thieving Magpie”, with its unavoidable echoes of the brawl between the Droogs and Billyboy’s gang in A Clockwork Orange, was a particularly nice touch). This time, Jack is the decisive victor, and Hannibal ends the episode on the run for the first time in the series. For anyone concerned about when the plot would get moving, worry no more. 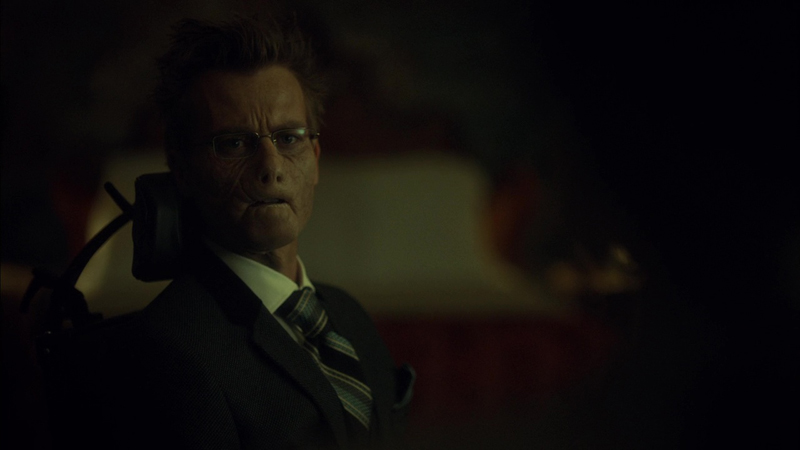 I’d guess that this episode was particularly satisfying for audience members who prefer the show’s grand guignol qualities to its unapologetically self-indulgent macabre poetry. I don’t use “self-indulgent” as a criticism—when I see a reviewer describe a movie that way, it means I’m probably going to like it—but viewers who might be rolling their eyes at the ultra-stylised close-ups of ashes in water, and rings in water, and snails, and stags, and such, were hopefully sated by the episode’s copious amounts of blood and guts. I enjoy the poetry and the blood and guts, and Fuller clearly does as well—it makes sense that the over-the-top death of Inspector Pazzi (Fortunato Cerlino) is the rare instance where the show stayed very close to the source material. I won’t argue that Hannibal is a great (or even very good) movie, but hearing a packed audience react to its gross-out scenes was one of my favourite moviegoing experiences, and I got a kick out of Fuller recreating one of its nastiest moments here. There’s just something about seeing a pile of intestines hit the ground with a splat that tickles me. I’m old fashioned that way.

Pazzi’s death scene also allowed for a nifty reimagining of the moment from Hannibal (the movie) where Clarice inadvertently calls Hannibal—here, it’s Alana (Catherine Dhavernas), trying to warn Pazzi when Dr. Lecter intercepts her call. The episode continues playing with the question of Alana’s alignment (as some of my nerd friends would call it—and, I guess, as I just did too), as she’s formed an uneasy alliance with Mason Verger (Joe Anderson) to exact vengeance on Hannibal, but isn’t willing to let an innocent person (relatively speaking) die in the process.

Speaking of Alana and Verger, I’d be remiss if I didn’t commend episode co-writers Fuller, Steve Lightfoot and Tom de Ville for having the show’s most repugnant character deliver what is possibly the grossest oral sex joke ever uttered on network television. Thankfully, the Botticelli’s nudity is still obscured—at this point, I just assume that NBC’s Standards and Practices department is high all the time. 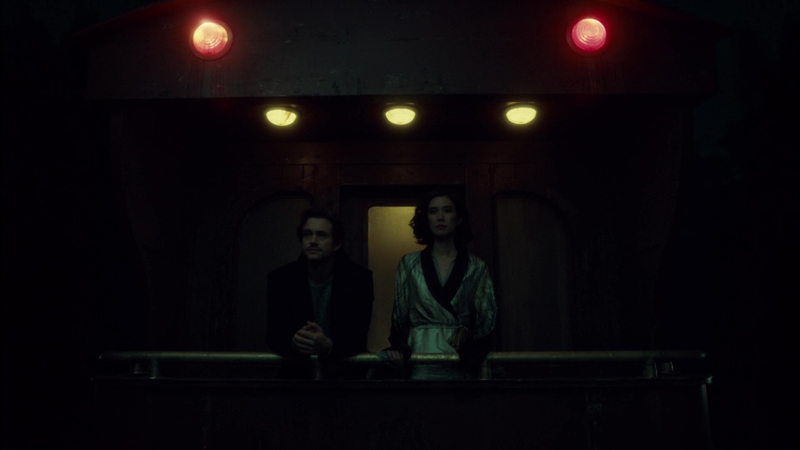 But I digress. “Contorno” does a great job of moving its various characters into place for what should be a pretty exciting pair of episodes before the Red Dragon arc begins. Interestingly, it’s Will’s (Hugh Dancy) narrative that’s advanced the least this week, although we do get at least one stunning moment where the ubiquitous stag compels a nearly defeated Will to continue his journey, reminding us that Will’s target is also his mentor. For Hannibal, Will’s morality is a burden that inhibits him from being his true self and keeps the two men apart—when Bedelia (Gillian Anderson) observes that sheep dogs can be trained to not kill the sheep, Hannibal counters that they still want to. What the character misses is that he’s the one that has attempted to condition Will; in his insistence that he actually encouraged Will’s true nature, he’s projecting his own desires and dashed hopes for what might’ve been, as is often the case after a particularly painful breakup.

Will may not really be the killer that Hannibal hopes him to be, but these guys can’t get each other out of their heads, and I’m anxious for their overdue reunion.