When evaluating movies from decades past, praise often gets misplaced. Critics recommend films of great personal distinctiveness from the 1960s and 1970s on the strength of their alleged boundary-pushing storylines and conception of characters, rather than on their expression of style alone. Ironically, they’ll praise cinema from the 1940s and 1950s in terms of stylistic inventiveness, and of the ways in which directors (working within the parameters and expectations of the studio system) inflected genre conventions with personal flair.

The truth is that many of the best movies from the ’60s and ’70s (while modernistic in substance and form) sometimes do little to deviate from the tropes and stereotypes of classic studio-era filmmaking. And many of the best films from said era offer little in the way of grand stylistic inventiveness.

In terms of style, Anthony Mann was a resolutely conventional director, most famous for his Westerns, in which he often cast James Stewart in the lead, but his movies still contained great potential for subversion and surprise. He was a master of setting and geographical filmmaking. He used the practical limits and possibilities of a landscape to give rise to surprising and exciting dramatic circumstances. The Far Country, recently released on Blu-ray by Arrow Academy, is one of his best movies. 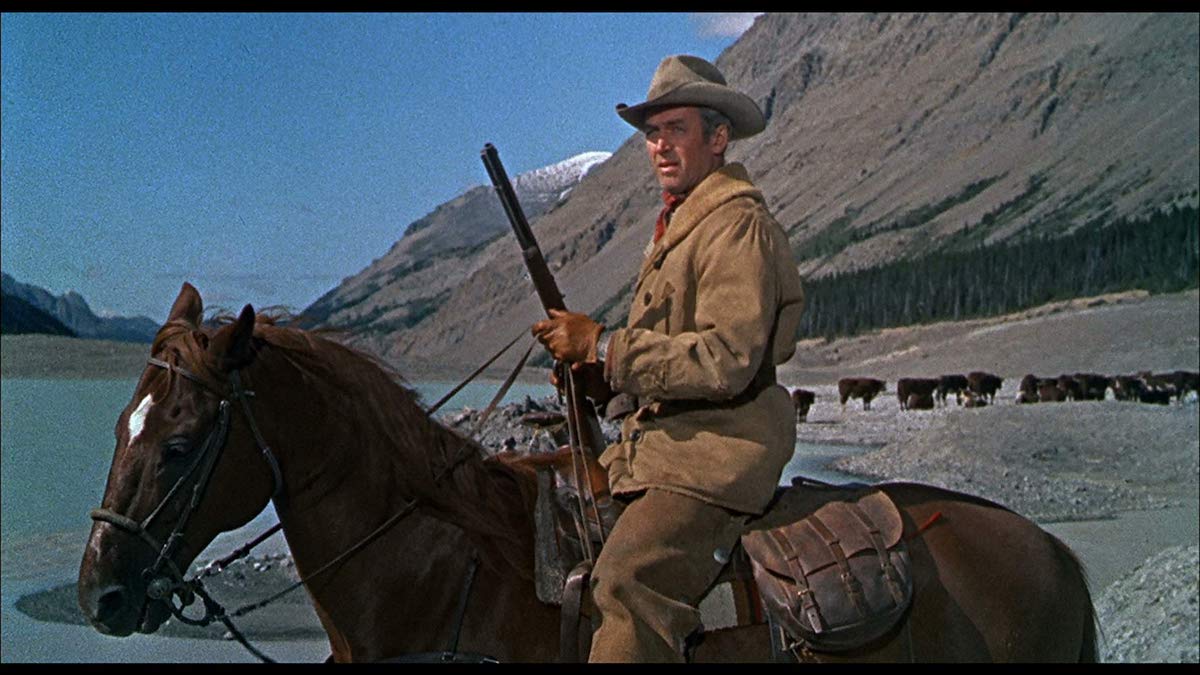 The Far Country stars Stewart as Jeff Webster, a cattle driver who, along with his sidekick Ben (Walter Brennan), is heading north, from Seattle into the Yukon, in search of the best price for his herd. Jeff, it turns out, is a wanted man: he murdered a pair of his own cattlemen for attempting to defect from a recent drive. The film opens with his dramatic escape from Seattle, helped by Ronda Castle (Ruth Roman), whom he meets aboard the ferry from Seattle to Skagway.

Once in Skagway (the point of departure for heading into the Yukon), Jeff incidentally offends the extortionist sensibilities of local lawman Judge Gannon (John McIntire) when he drives his cattle herd through the middle of the town and disrupts a public hanging. In retaliation, Gannon confiscates Jeff’s herd. Ronda, whom it turns out is a bit of an extortionist herself, hires Jeff to drive her own herd north to Dawson City. Jeff agrees—but after successfully driving Ronda’s herd beyond the jurisdiction of Gannon, he returns to Skagway, steals his own herd, and joins it to Ronda’s. Gannon promises to hang Jeff as soon as he returns to Skagway, which, according to Gannon, is an inevitability. When winter comes, there’s only one way out of Dawson City, and it’s through Skagway.

Jeff is a stubborn individualist. He expounds on the merits of looking out for one’s own neck and refuses help to his allies at crucial moments of peril throughout the story. He’s a consummate antihero before such a term existed; the type of protagonist more likely to show up in film noir than a Western. As film critic Kim Newman points out, in this Arrow Blu-ray’s bonus material, Jeff walks a razor’s edge between his own latent morality and his allegiance with Ronda, who’s unfair scheming (she buys all of Jeff’s cattle and sells it back to the residents of Dawson at exorbitantly marked-up prices) threatens to oppress the residents of Dawson City. 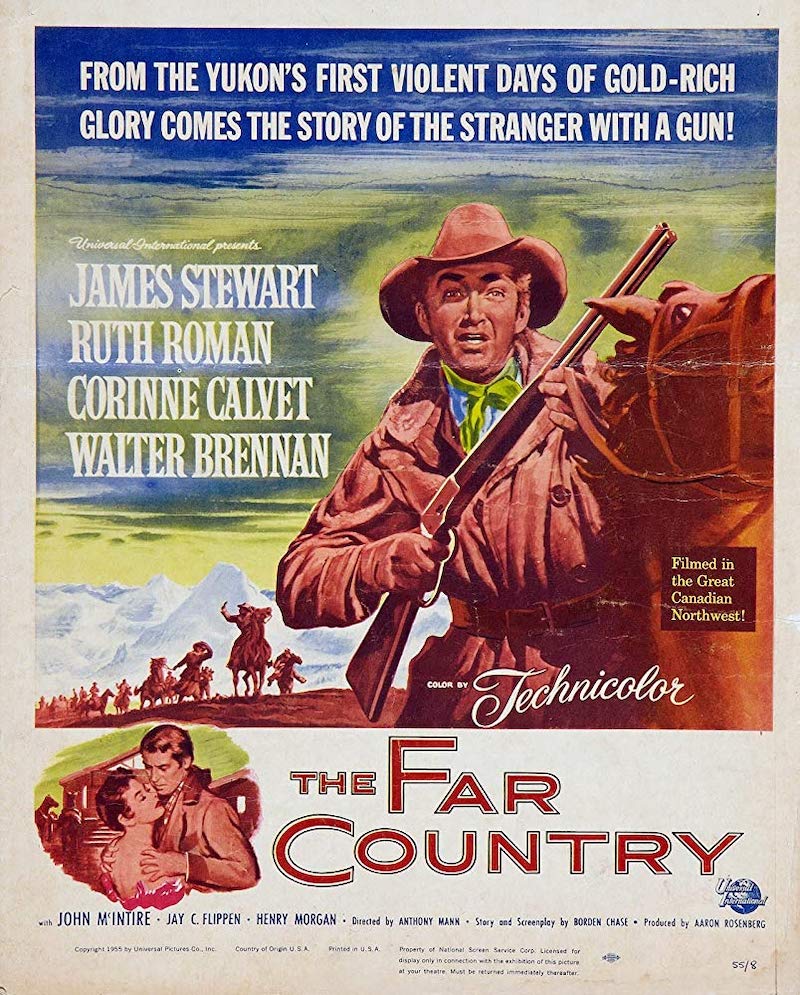 Jeff’s conscious reaches him through other characters. Renee Vallon (Corinne Calvet) is the film’s alternate love interest. Noble and honest, she’s also Ronda’s foil as her warm and considerate worldview contrasts with Ronda’s selfish business practices. Ronda and Renee both love Jeff, and Jeff’s interactions with the two of them are the most literal dramatisation of his ability to choose between selfishness and altruism. Ben, the sidekick, also keeps the voice of conscience sounding in Jeff’s ear. Ben represents another sort of domestic tranquillity and familial responsibility. He’s constantly talking about the ranch in Utah that he and Jeff have evidently discussed buying after amassing their fortunes up north. As also noted by Kim Newman, the relationship between Jeff and Ben comes about as close to a homosexual bond as one could find in a studio-era Western. Though typically a hard-nosed director, Mann infuses The Far Country with humour and innuendo.

The Far Country may also be the most classically Western-y of Mann’s many Westerns. The moral precipice that Jeff flirts with is tied into the city of Dawson’s broad concerns with the rule of law. Like the most quintessential of all studio Westerns, John Ford’s The Man Who Shot Liberty Valance (1962), Jeff’s decision to fight or flight when tensions between civic fairness and authoritarian demands come to a head will have lasting political implications in the world of the story.

In the end, it’s not so much that Jeff makes the right choice, as it is that his self-interest and interests of justice converge. Ronda’s fatal attempt to warn Jeff to danger when he faces off with Gannon allows for a remarkably conventional ending, in which the hero at least appears to do the right thing. One wonders if the logic of such a conclusion was derived from the same thematic material as the rest of the script, or if it was necessitated by the expectations of studio supervision.

Though Stewart and Mann would never make another Western for Universal that was as successful as Winchester, they delivered another big hit for the studio with the musical biopic The Glenn Miller Story (1954), which they followed up with The Far Country. Mann and Stewart did make Westerns for studios other than Universal. For Columbia, they made the successful Man from Laramie (1955) and for MGM, The Naked Spur (1953), perhaps their most savage film. The fascinating realisation provided by the documentary’s crucial context is that Anthony Mann was the first director to see the casting opportunity in Stewart as a brutal, hard-bitten, cynic. Today, that version of Stewart is among the most classic of the on-screen personas that are considered emblematic of the Western genre itself. 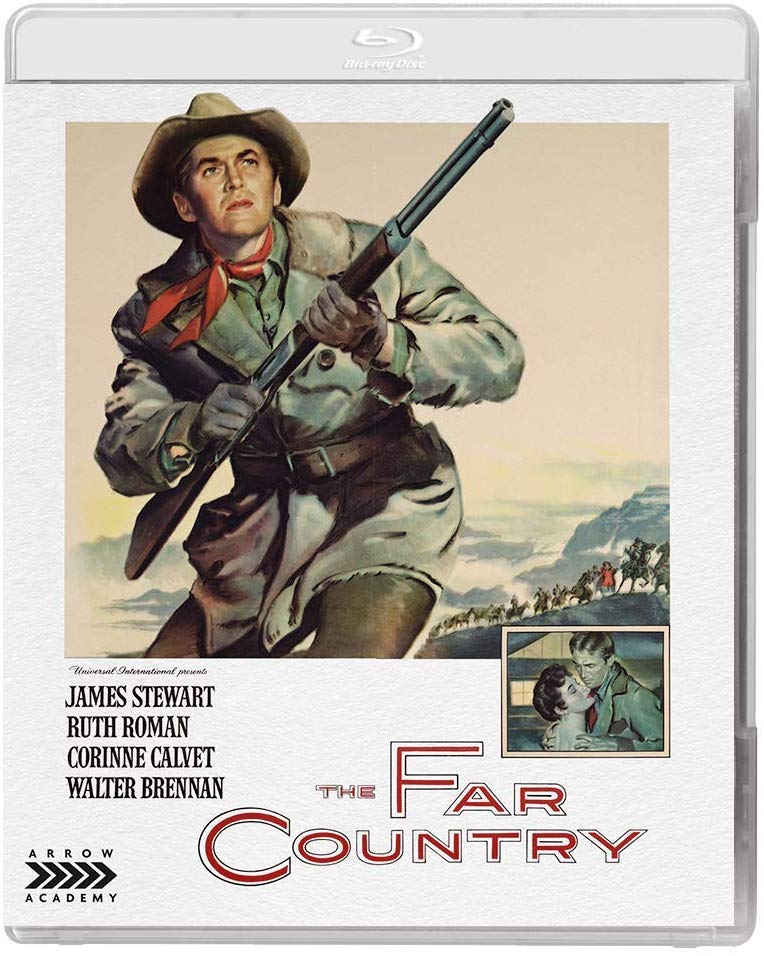