When a film’s based on a true story, it often means it’s telling such an incredible story that it’s hard to believe it’s actually true; or it can occasionally mean it’s tragic and sad enough to remind you about the harsh realities of our lives. Everest is the latter kind of true story. This is a film about what happens when humans truly test the limits of their capabilities, and the devastating consequences of trying to scale a mountain like Everest that, as we’re often reminded, is quite literally killing climbers the higher they ascend.

The story that Everest tells is that of the real events of the 1996 Mount Everest disaster, in which numerous people perished during attempts to reach the summit of the mountain. Right from the get-go, the film lets you know that it’s all about the commercialisation of climbing Everest, and the inherent problems with large numbers of mountaineers joining group expeditions and crowding the higher reaches of this deadly peak. 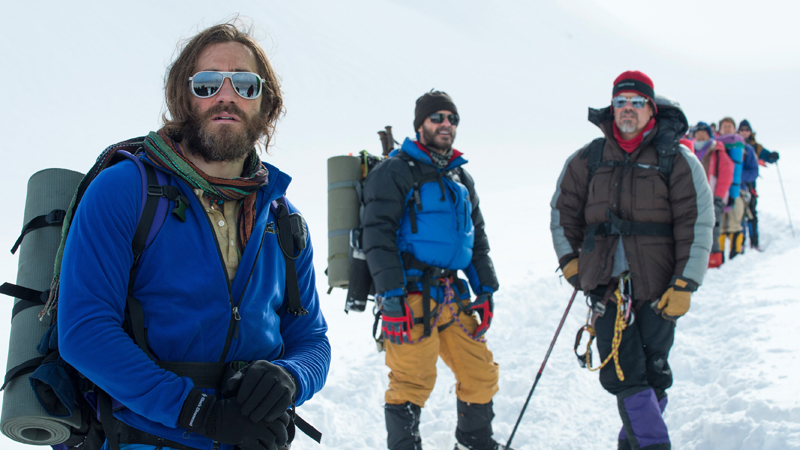 As you can see, this film has a big cast and a lot of stories to tell. I’ve barely even scratched the surface on the number of characters that have important roles to play in this film, as you’ve also got the Adventure Consultants team members; played by Elizabeth Debicki, Emily Watson and Sam Worthington, along with Hall’s wife Jan (Keira Knightley) and Weathers’ wife Peach (Robin Wright) all featuring prominently.

It’s a uniformly excellent cast, and one thing that this film and its actors accomplish successfully is the feeling that these individuals seem like real people. Their dialogue feels natural and honest, and the performances are equally as heartfelt. There’s nothing overblown or melodramatic about what’s going on in Everest, it’s just simple, great acting and writing that brings these characters to life. In particular, Clarke, Hawkes, Brolin, Knightley and Gyllenhaal deserve to be recognised for their strong work here.

Some will argue that if you know what happened in 1996 on the slopes of Mount Everest, this film won’t have any shocks or surprises for you. They may well be right, but where this film sets itself apart from other real-life stories is that it doesn’t attempt to make the tragedy shocking… more heartbreaking in its inevitability. From early on, we get frequent reminders of how dangerous attempting to climb Everest is, and how quickly the weather can turn against you. The film’s pacing becomes one of its main strengths, as it doesn’t rush into anything, just slowly builds a sense of impending disaster.

In the end, it’s hard to feel surprised because the film takes its time to get the audience used to the idea of something terrible lurking fatefully around the corner, just before it shows us how onscreen deaths can be sudden, banal, and sad all at once. 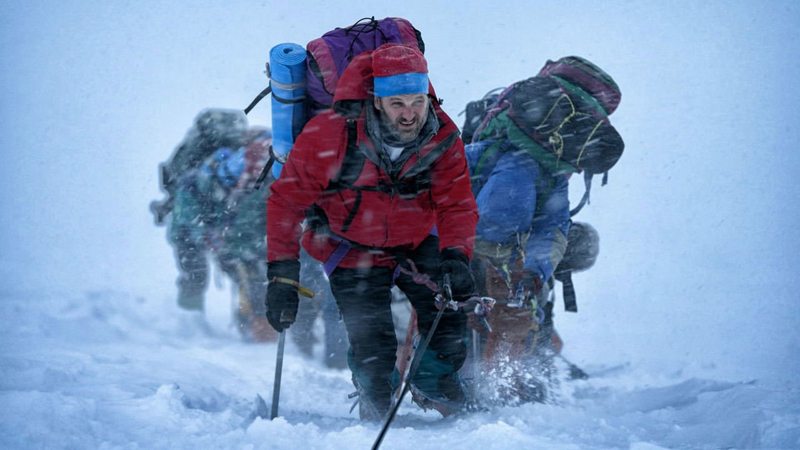 While it’s emotional to watch what happens in the film, it’s important to note that there’s very little that is mawkish or overly-sentimental about what Everest does. It’s an incredibly powerful film, but it doesn’t have that effect on the audience by lingering on moments, or relying on anything that would feel overwrought. It underplays devastating consequences of these expeditions in just the right way, and feels all the more realistic and affecting as a result. There’s something fascinating and confounding about why a person would risk so much just to climb a mountain, and the film covers the man reasons these climbers have for putting themselves through a life-endangering challenge.

Almost above all else, the visual spectacle and breathtaking cinematography of Everest helps it make its point about just how much humans are dwarfed by the power of nature and the unparalleled majesty of the famous mountain. If you’re able to watch it in IMAX 3D, I’d recommend you do. The expansive scope and the gorgeous scenery make this a tremendous viewing experience.

There are a couple of criticisms about Everest’s narrative that can be made (such as how it sidelines both the roles and the deaths of sherpas that occurred in 1996, or how there are moments where the exposition and foreshadowing come on too strong), but these are small issues in the face of such a compelling story rich with visual power, characters who feel real, and a story that isn’t about human achievement as much as it is about hubris. It’s not that this tale is too tragic to believe, it’s just heartbreaking enough to make it clear what we’re watching really happened… and there’s rarely a triumphant ‘Hollywood ending’ in real life.

A BEAUTIFUL DAY IN THE NEIGHBORHOOD (2019)