The premise of Stephen King’s novel Cujo is one of his most simple: what if that big, sharp-toothed wolf-descendant in your house suddenly went feral? How safe would you and your kids be? Our surrogate for this question is Donna Trenton (Dee Wallace), an adulterous wife and mother, who must protect herself and her son Tad (Danny Pintauro) from a very-real monster of the type she’s tried so hard to convince him doesn’t exist.

On the outskirts of the film, there’s Donna’s husband Vic (Daniel Hugh Kelly), her jealous lover Steve (Christopher Stone), and police officers, not to mention the family who owns the titular mutt. Although you think you know who’s going to make it out alive, and who’s definitely going to become the Castle Rock equivalent of Pedigree Chum, much of the fun comes from speculating over the minor characters, and from the fear you’re wrong. 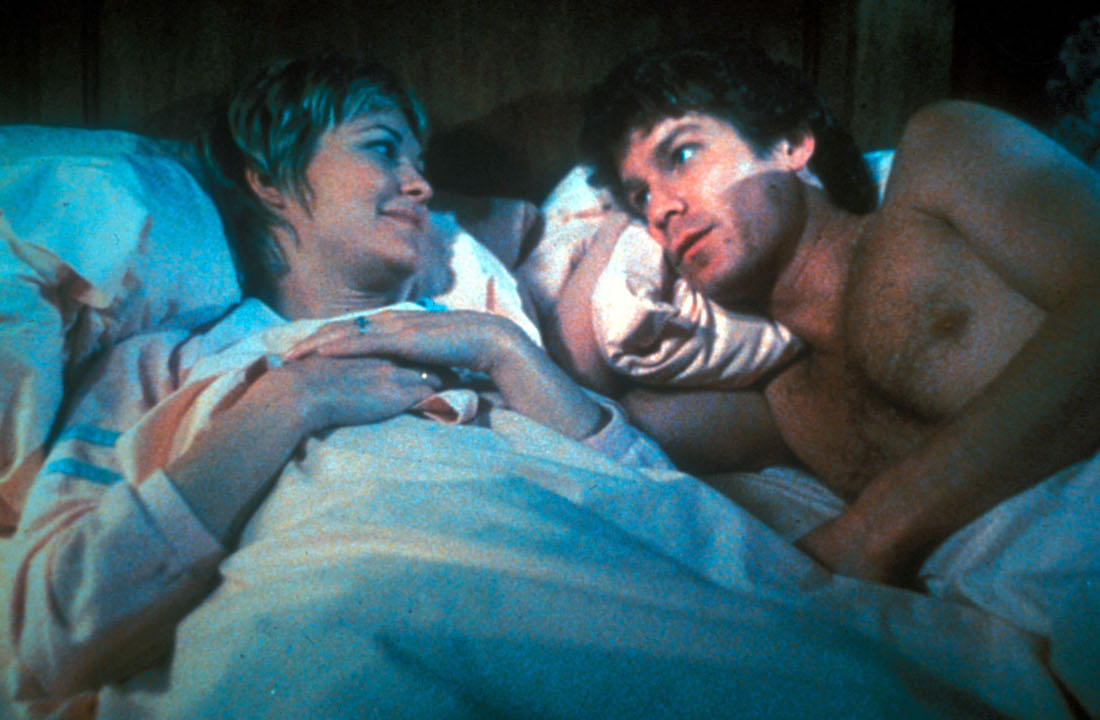 The simplicity of King’s novel is something that Don Carlos Dunaway and Lauren Currier’s film adaptation has an ambiguous relationship with, expanding certain sections of the novel and jettisoning others. Initially, the simplicity makes for uninspiring characters that display little personality despite the very real and complex personal problems they find themselves in: adultery, unhappy marriage, etc. And the simple dialogue also runs the gamut from laughably bad (“oh no, you’re rabid!”) to pleasingly blunt (“fuck you, dog”).

But when the horror starts this simplicity also makes for some of the most satisfyingly tense scenes: the simplicity of a broken down car… of a seatbelt that won’t release… of a police officer about to reach for his radio and report in, only to be distracted by a sound nearby. Cujo’s at its best when cutting between Dee Wallace’s pallid face and the expressionless eyes of whichever dog is playing Cujo as that point.

Legendary cinematographer Jan de Bont’s almost deliberately unstyled but naturally beautiful compositions also lend the film a raw realism. The vistas that stretch out from the back of the primarily rural locations shimmering in a summer haze. Visceral, tactile details such as Cujo’s blood-soaked fur and foam-smothered face, to the sweat dripping from Donna’s upper lip, are enough to turn your stomach. 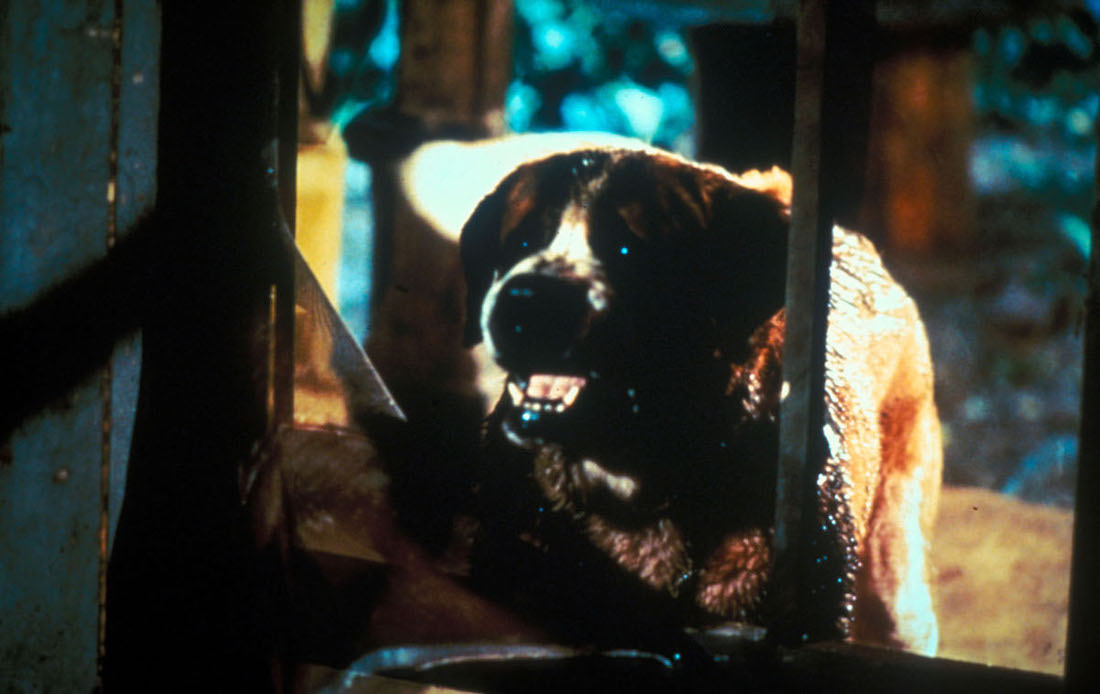 Lewis Teague’s direction begins with equally simple but time-tested techniques, such as the POV kill-camera, but soon evolves into something more original with swooping camera moves that neatly establish the geography of a scene, and just how far Cujo is from the throat of his next potential victim. Although the final effect may not be revolutionary, there are virtuoso camera moments and Neil Travis’s editing gently and successfully builds the tension. Charles Bernstein’s score is similarly functional, but also effective.

Ultimately though, for simplicity to be satisfying it has to be executed perfectly and, sadly, at 93-minutes Cujo still manages to outstay its welcome by nearly half-an-hour. Donna and Cujo go just one too many rounds together, with the finale not providing quite the catharsis of a more effective killer-animal film, such as Jaws (1976), or a similarly claustrophobic King adaptation, such as Misery (1990). It also lacks those films’ sense of humour, which is felt heavily in what is a largely static movie. And despite outstaying its welcome, Cujo’s attempts at misdirection ultimately leave several story threads maddeningly unresolved. The final effect is the feeling of spending too much time on one area of the story, and too little on the rest. 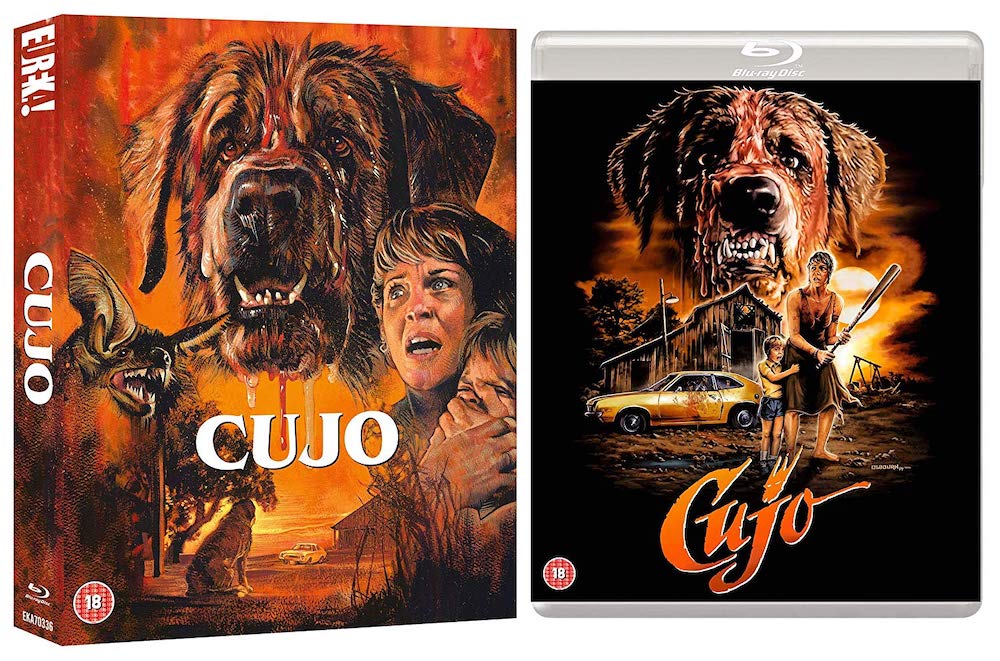 Eureka Entertainment’s new digital transfer has some pops and scratches on the print, but with low-budget horror such as this, they only add to the film’s grindhouse feel. Otherwise, this transfer has been very well done with no digital grain. This Blu-ray also comes with a cornucopia of extras, including a Making Of that tracks the entirety of the production. This documentary reveals such interesting techniques as building dual sets to lend differing perspectives; the lengths underwent to create a convincingly hot-looking environment in freezing cold shooting conditions; and just how they edited together a mix of dogs, stuntmen in dog costumes, and creative camerawork. Throughout it all, Lewis Teague gives a compelling interview and is very open and clear about the decisions he made and why.

Alongside this documentary are an impressively extensive range of interviews with cast and crew, and a new interview with critic Kim Newman, an always reliable expert who delivers a 27-minute monologue on the history of Stephen King adaptations and Cujo’s place in it.

The biggest draw of the extras, however, is new writing and a new commentary track from Lee Gambin, author of Nope, Nothing Wrong Here: The Making of Cujo, who must be regarded as the world’s top expert on this film, and he expounds on it enthusiastically. No fan could possibly feel short-changed by the amount of extra content this release includes.