I skipped American Horror Story’s first season at the time because it looked like hot garbage. I wasn’t entirely wrong—I checked it out after friends encouraged me, and it is trash; but it’s trash that’s way more entertainingly bonkers than it has any right to be. I flat-out loved the second season, Asylum; as with the other instalments of the series, it used its creepy central location to throw together aliens, Nazi doctors, demonic possession, a serial killer, musical numbers, and somehow, the entire thing was emotionally (if not dramatically) coherent and ultimately moving. The next two years, Coven and Freak Show, were more of a mixed bag; but even at its worst, the show’s cheerful tastelessness and sudden left turns into moments of disarming pathos were enough to keep me tuned in.

Any American Horror Story fan has to accept that series creators Ryan Murphy and Brad Falchuk aren’t interested in things like restraint, good taste, consistency of tone, or basic plot and character logic. American Horror Story is often at its best when it’s flying off-the-rails, and I can’t think of another show whose best and worst episodes are only a few degrees apart. The show is Hannibal’s slutty, drug-addled brother that acts obnoxious at parties and seems like an idiot until he randomly says something so insightful that you honestly don’t know if it was accidental or not. Sometimes Murphy, Falchuk and the show’s writers chase their sleazy muse to unexpected heights… and sometimes, as with the premiere of American Horror Story: Hotel, it leads them to a junkie being raped by a phantom wearing a drill bit strap-on. 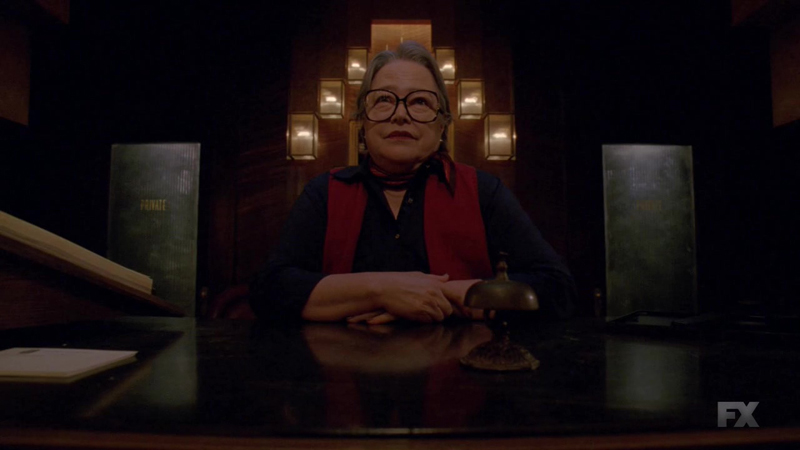 By the time that scene arrives, about twenty-minutes into the premiere, we’ve already been treated to a pair of young Swedish tourists discovering a freaky dude sewn into their mattress, and a grotesque mid-coital crime scene that’s equal parts Seven and Friday the 13th Part 2. Murphy and Falchuk have never been as interested in building suspense as they are in assaulting us with freaky stuff before we even get our bearings, and sometimes that works. But when Max Greenfield, as a heroin addict we haven’t even been introduced to, checks into the hotel and, within a minute of screen time, is held down and raped in surprisingly graphic detail by a phantom (or crazy guy in a fleshy gimp suit, or who knows what), it’s the stupidest and most repugnant moment in the show’s history. And even the worst seasons usually start strong!

In retrospect, probably the worst thing to happen to this show was the buzz surrounding the mysterious gimp-suited character who impregnates Connie Britton’s character in season 1. Since then, the show has chased that same buzz, trying to one-up itself with escalating depravity, and the drill bit rape scene is the logical endpoint. I’m not saying that rape or any uncomfortable subject should be off-limits in a genre that exists to explore the darkest side of our nature, but what offended me about this scene is the thudding literal-mindedness of how it’s staged and shot. In Seven, we learn about a grotesque incident involving a killer strap-on through a brief shot of a blurry photo and a character, played by Leland Orser, who’s been deeply traumatised by his unwitting participation. The sequence terrifies because of the way it gradually insinuates the most horrifying aspects of what happened, letting them grow in our imagination. I wouldn’t expect or even necessarily want American Horror Story to be that comparatively subtle, but at its worst, the show presents extreme content in such an artlessly literal-minded way that we can’t feel anything except disgust. Then again, literal-mindedness shouldn’t be such a surprise for a show that closes out the first episode of its season set at a California hotel with The Eagles’ “Hotel California,” or that follows its overt homage to The Hunger with “Bela Lugosi’s Dead” a few scenes later. 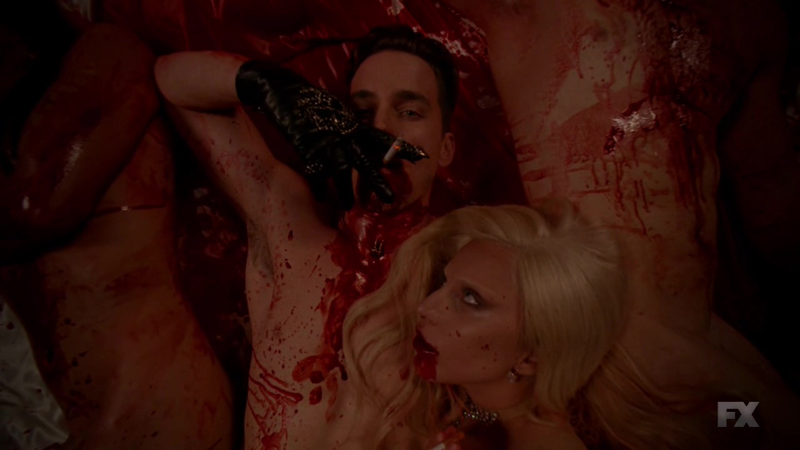 About that Hunger homage. I was about ready to check out (get it? I should be a writer on AHS) when the show arrived at the nearly dialogue-free sequence, set to She Wants Revenge’s “Tear You Apart” (a much more inspired soundtrack choice), introducing us to Lada Gaga’s bloodsucking Countess Elizabeth and her companion, Donovan (Matt Bomer). This is the kind of trash I want from American Horror Story—Gaga and Bomer getting dolled up, snorting coke, picking up another couple at a cemetery screening of Nosferatu (apparently, making the cunnilingus hand gesture like a 14-year-old is an effective way to pick someone up if you’re Gaga) and retiring to the hotel for a bit of couples-swapping that soon turns bloody. It’s about three minutes of enjoyably sleazy, stylish TV that speaks to my inner horny, horror-loving adolescent, and I realised with some regret that, no matter how stupid this thing gets, I’m sticking around until the end. As for Lady Gaga, I don’t know yet if she’s a good actress, but she’s perfect for this show—when I learned Gaga was a drama student, everything about her suddenly made sense to me (in a good way), and you can tell she’s having a blast. Whatever else American Horror Story does wrong or right this year, if they somehow screw up Lady Gaga as a sexed-up, fabulous-looking bloodsucker with a nursery of as-yet-unexplained creepy kids, that’s their fault not Gaga’s.

The episode introduces a lot of other characters and plot threads I haven’t even gotten to yet—Wes Bentley as a homicide detective being taunted by a serial killer, Denis O’Hare as a bald cross-dresser named Liz Taylor, Sarah Paulson (an insanely talented actress who always gives this show more emotional credibility than it earns on its own) as a junkie ghost and walking embodiment of the 1990s, Kathy Bates’s concierge holding the aforementioned Swedes captive and force-feeding them oysters (???), and most intriguingly, the unseen “thing in room 33” that Bates has to feed. It remains to be seen whether this season will get better or worse (probably worse, though), but as always, there’s just enough going on to capture my interest and make me hope it might find its way back to the improbable heights of Asylum. Every time I think I’m out, this silly, silly show pulls me back in.