This late-1990s attempt to create a new horror icon didn’t go to plan. Wishmaster was profitable (grossing $15 million from a $5–6m budget), but its three sequels went straight-to-video, although it’s evident the studio had some faith in this original. It was “presented” by genre legend Wes Craven, creator of A Nightmare on Elm Street (1984), despite him being instrumental in pushing horror away from supernatural boogiemen with the post-modern slasher Scream (1996) a year earlier. Not only that, but it’s full of cameos from actors associated with similar franchises like Friday the 13th, Phantasm, and Candyman, almost like they’re passing the torch to The Djinn (Andrew Divoff) as the ‘next big thing’ in Hollywood horror.

Unfortunately, the torch was dropped. Wishmaster has since become a cult curio at best; beloved by those who saw it during an impressionable age (i.e. teens who never experienced this kind of movie in the 1980s because they were underage), or more recently junk cinema enthusiasts who get a kick out of gloopy practical effects, ropey CGI, and telegraphed jump-scares. 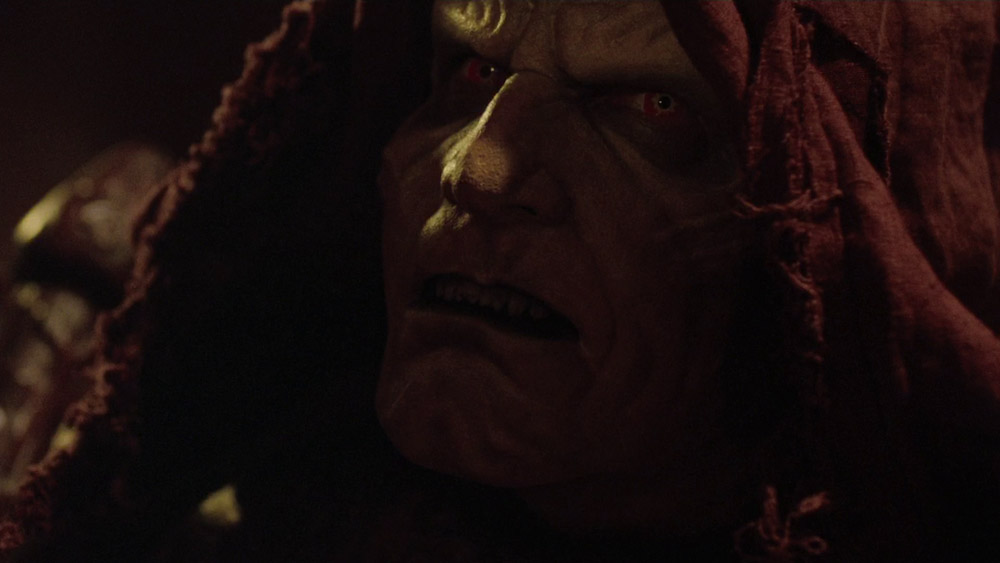 Wishmaster takes the Arabian folklore entity of a “djinn” as its basis, which is popularly known in western culture as the “genie” featured in some Arabian Nights stories (most famously Aladdin). Here, an opening narrated by Angus Scrimm (Phantasm) reveals the djinn are creatures “condemned to dwell in the void between worlds”, but who can escape into our world if a person who awakens one makes three wishes they’re compelled to grant. The familiar twist is that the Djinn is a trickster who interprets human wishes in the most negative way possible, leading to their pain, suffering, and probable death.

A prologue set in Persia, 1127 A.D, gives us a grisly taste of just what the Djinn is capable of once he has the ear of an emperor whose wishes have resulted in his people being tortured and mutilated, until a sorcerer (Ari Barak) traps the evil Djinn inside a fire opal. Centuries later, the opal since hidden inside an antique statue of Ahura Mazda being delivered to an art exhibition, the Djinn breaks free after a hungover dockyard worker damages the statue and steals the jewel from the rubble, which is later appraised by Alex Amberson (Tammy Lauren) who awakens the dormant Djinn inside. 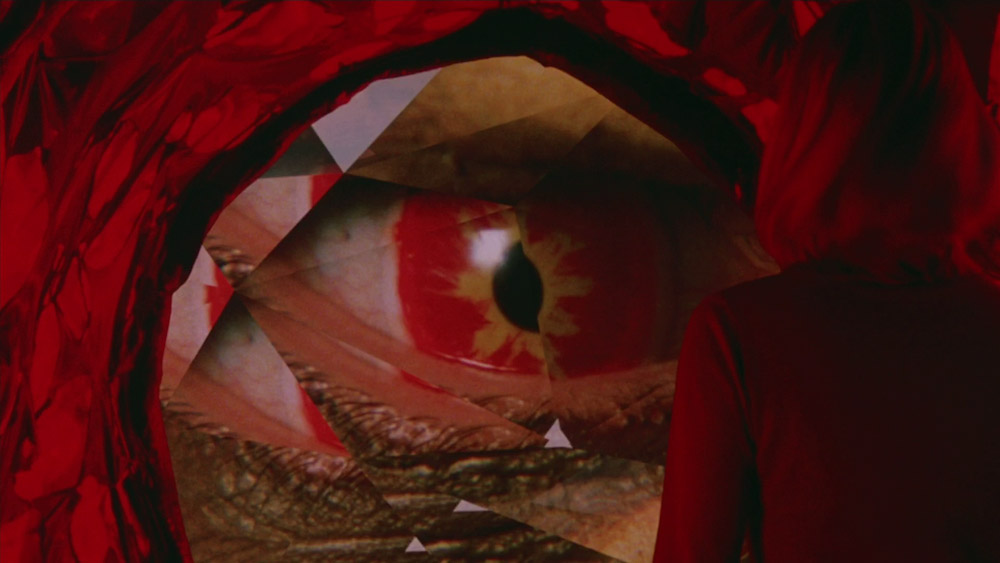 This is predictable preamble for a movie that ultimately exists to get Andrew Divoff creeping around covered in green facial latex, twitching snake-like dreadlocks, and wearing sharpened teeth. Divoff’s large chin and sonorous voice makes him an instantly appealing presence as a horror villain, heightened by the camp glint in his eye and a memorable way of emphasising the s’s in the word “wishes”. In a movie that has creative problems, Divoff is the undeniable highlight and crafts a character who’s imposing and disgusting, but also quite suave and predatory in later human form. He only stuck around for the immediate sequel Wishmaster 2: Evil Never Dies (1999), but it’s a shame the role wasn’t his ticket to the same level of cult stardom enjoyed by co-star Robert Englund. He’s great.

Wishmaster’s concept is definitely fun, but gets rather strained. It’s initially a dark thrill to see how people’s innocent wishes are twisted into horrific realities, but only a few of them truly work as the should. The best is when a pretty shop worker is made to wish she’ll be beautiful forever, before being transformed into a shiny mannequin. Other times, the script struggles to come up with wishes that get ironically contorted in logical ways, or scenarios where the Djinn isn’t just lazily suggesting wishes to people and getting them to agree. It’s admittedly a tricky concept to make work more naturally (as people don’t constantly go around saying “I wish…”), but it could have been done better. 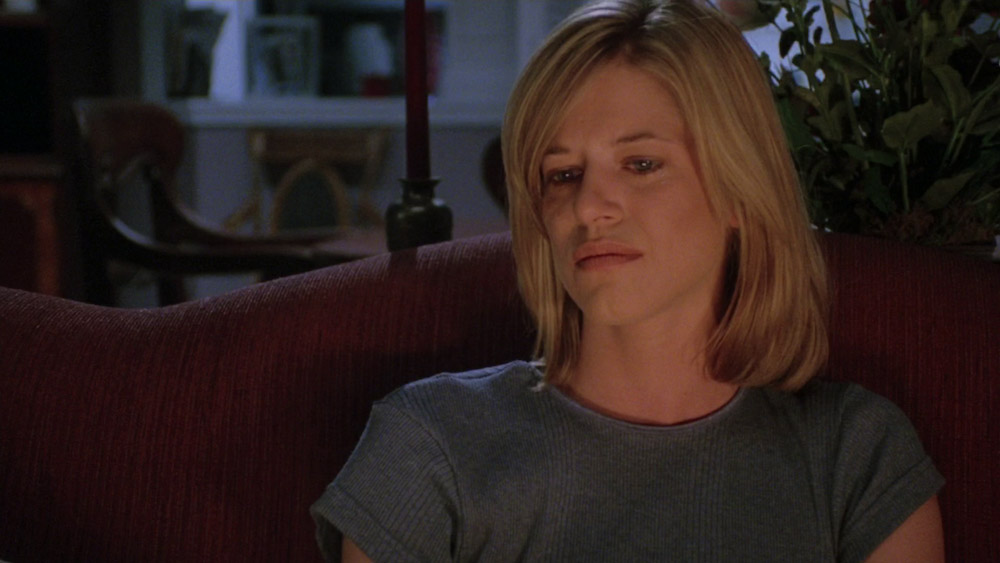 Whatever you think of the movie itself, after 21 years it’s become another interesting time capsule of its era. Already a throwback to the mid-1980s for audiences of the time, today it combines lots of gooey practical effects familiar to connoisseurs of pre-digital horror, but with dollops of early-CGI that’s atrociously composited into shots by a variety of F/X houses. Robert Kurtzman (one third of legendary makeup effects team KNB with Greg Nicotero and Howard Berger), directed this movie, so it’s no surprise to see the $5 million budget was spent very creatively. There are more than enough disgusting make-up effects and gruesome sequences to satisfy fans of this stuff, and it’s another strong case for the abandonment of digital effects for something more tangible.

One thing I didn’t expect from Wishmaster is noting the unusual way Tammy’s character is written, being introduced as a woman who doesn’t need a man in her life, whose best friend is male (to his sexual frustration), and who coaches a team of female basketball players. And where other horror movies would partner her up with a boyfriend or husband, who’d likely die halfway through the movie, Tammy instead hangs around with her younger sister Shannon (Wendy Benson) and becomes her protector. It’s interesting to think that her antagonist is a manipulative male, offering Tammy the opportunity to wish for all she desires, and she spends the entire movie fighting that kind of toxic personality. After the genie is defeated and put back in his “bottle”—uh, spoilers?—there’s a scene where Tammy seems ready to take her male friendship to a more romantic level, almost like the whole experience has ironed out a few issues for her. There’s some good stuff there for a low-budget horror from writer Peter Atkins, but it’s somewhat swallowed up by the wackier premise at the forefront of things by Kurtzman. 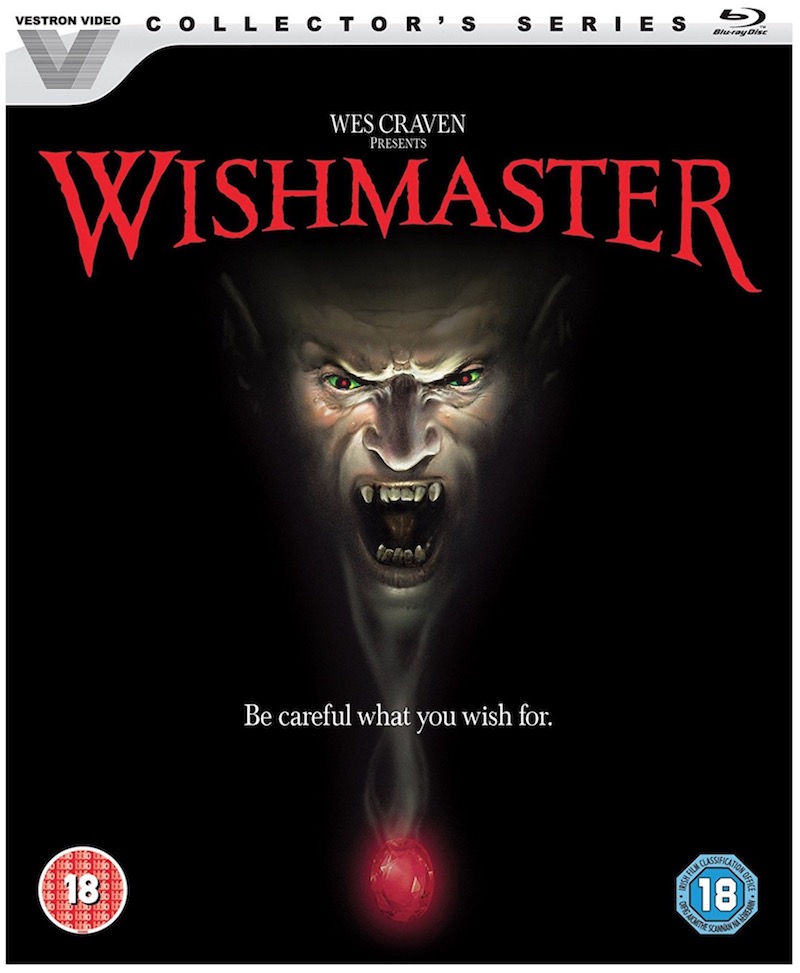 Lionsgate’s Vestron Video have produced a 1080p transfer of Wishmaster presented in 1.78:1, which is generally very good, although the sequences inside the Djinn’s fire opal involve a red-and-black colour palette that crushes the detail of the sets and make-up. The audio is a DTS-HD Master Audio 5.1 mix, which won’t astonish, but it does have crisp dialogue and occasionally good atmospheric effects.