Yorgos Lanthimos’s tragi-comedy The Favourite is set in the 18th-century English court of Queen Anne (Olivia Colman) and boasts three of the best female performances you’ll see this year. Colman herself is perfect as the stubborn, childish, often tragic monarch; depressed, suicidal, and constantly in pain with gout. Queen Anne isn’t a good ruler, as she’s too tired and nervous to make decisions, so relies on her friend and lover Lady Sarah Churchill (Rachel Weisz, who in return asks the Queen to double land tax and fund a war with France to enhance her husband’s (Mark Gatiss) status. Robert Harley (Nicholas Hoult, having the most fun in a powdered wig) leads a forceful opposition to this funding, demanding a peace treaty in order to save money and lives.

Sarah and Anne’s mutually beneficial arrangement changes when Abigail (Emma Stone), Sarah’s younger cousin, arrives at court in hopes of employment. It doesn’t take long for the two-faced Abigail to make her way into Anne’s bedchamber, soothing her ailments and wheeling her around the castle. This prompts a power struggle between the two women, with the men unknowing pawns in their ambitious plans. There are hints, albeit more expletive and kinky, of All About Eve (1950) to their love-power triangle but, for a film about sex, it’s one of the least exploitive lesbian films in years. 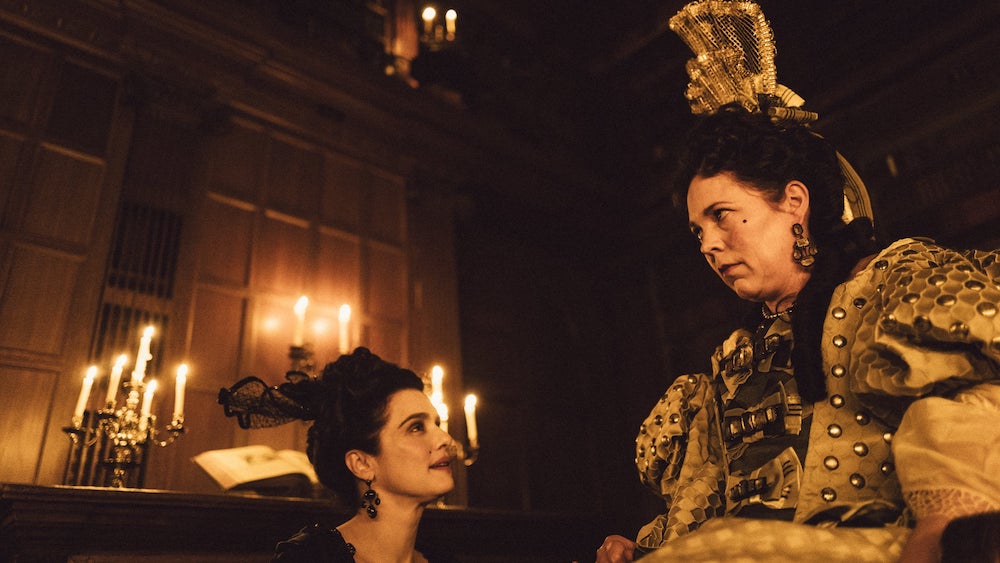 The Favourite perfectly mixes personal and political triumphs and loses. Written by Deborah Davis and Tony McNamara, the dialogue is razor-sharp and often incredibly funny, delivered perfectly by the three lead actresses. While The Favourite lacks the oddity and stilted performances of Lanthimos’s previous work The Lobster (2015) and The Killing of a Sacred Deer (2017), it still has the amusing absurdity that many find uncomfortable. Some of the highlights include the incongruity of things against the historical setting, like a very contemporary dance routine and the Tories’ hobby of throwing food at naked men. Much like the director’s previous work, it reveals the bleakness of human nature and showcases the cruelty of society.

Despite being a costume drama it feels more modern than its corset-wearing peers. If you’re not a fan of usual uptight period films, don’t let the historical setting put you off. The language is vulgar and hilarious, with the women dropping put-downs at blink-and-miss-it speed. The modern absurdist attitude is only enhanced by Robbie Ryan’s cinematography, which often uses fisheye lenses to bend the corners of rooms like you’re watching everything through a CCTV camera. 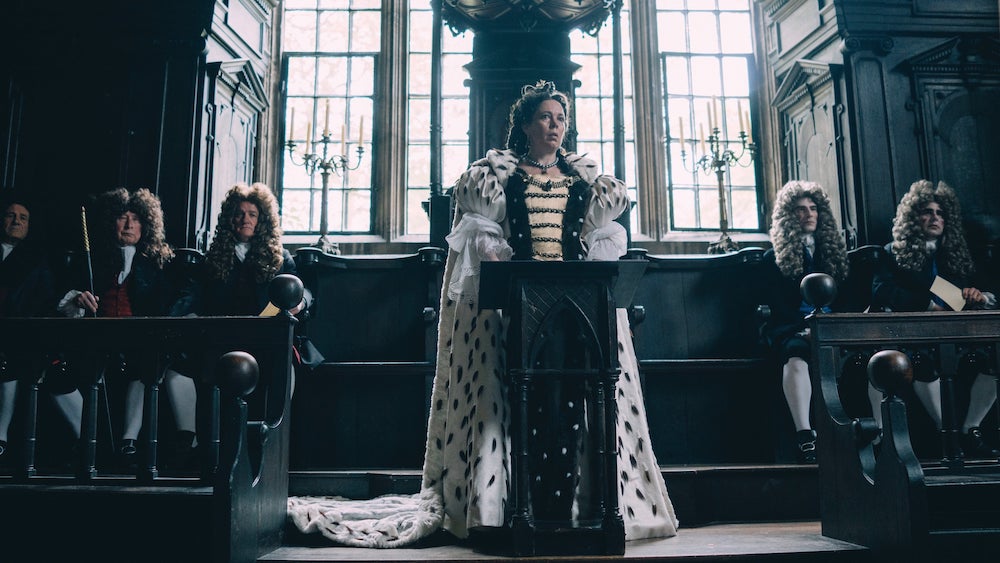 The soundtrack is the biggest problem with The Favourite, as the strains of Handel, Purcell, and Vivaldi sometimes overwhelm scenes. The music is loud and unsettled, which adds to the off-kilter atmosphere, but it can also be distracting and painful to listen to.

Thankfully, while The Favourite could have fallen down a strange rabbit hole without strong enough performances, Colman has never been better as a childish monarch having many temper tantrums. A less talented actress would play up the role for laughs, but Coleman perfectly mixes the comedy with real pathos. Weisz is steely and fearless as Sarah, using physical comedy and sharpness to get her own way, while Stone delivers a career-best performance as she negotiates between innocence and determination, switching between two personalities.

The film excels more in the first half, where it’s a little funnier and less tragic, as the quick-witted one-liners are sorely missed in the third act of The Favourite. But, overall, this is a triumphant drama about confident women grasping for power using their wit and sexuality.