Maleficent (2014) was an intriguing idea that occupies a unique position in Disney’s live-action remake cycle. Rather than trace over Sleeping Beauty (1959) with flesh-and-blood actors, Maleficent instead focused on the story’s distinctive villainess and only followed the 1959 animation’s plot loosely—itself adapting Charles Perrault’s fairy tale. I saw the movie when it debuted on Blu-ray, but don’t remember much about it now, although the startling image of Angelina Jolie with sharp alabaster cheekbones and twisted black horns is a hard one to shake.

There was no need for a sequel and nobody was demanding one, as Maleficent’s emotional arc was completed in the original… but here comes Maleficent: Mistress of Evil nevertheless. It’s a juicy title that promises something meaner and darker for the kids who enjoyed the first one and might now be teenagers, but incoming director Joachim Rønning (Pirates of the Caribbean: On Stranger Tides) doesn’t mess with the formula. He gets to make a different version of the first movie, which isn’t an entirely wasted effort if you have low expectations. 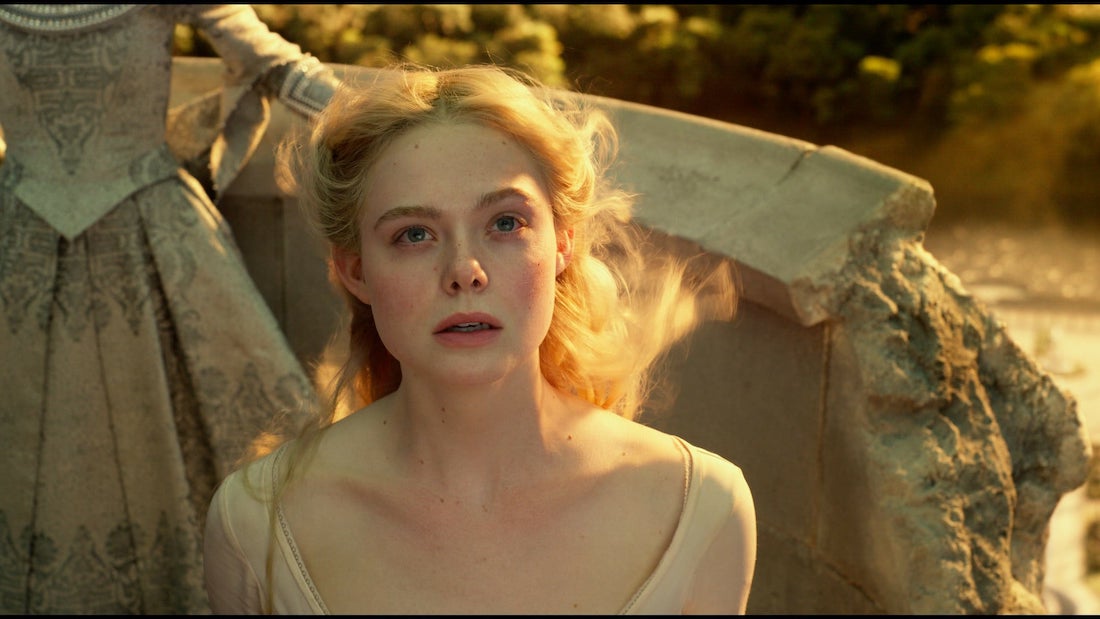 Five years after the events of the last film, Aurora (Elle Fanning) is now Queen of the Moors with her magical godmother Maleficent as its guardian and protector. They make a good “godmother and goddaughter” duo, but the neighbouring kingdom of Ulstead remains wary of once-evil Maleficent’s reputation and frightening past, so King John (Robert Lindsay) decides to broker a peace by having his son Prince Phillip (Harris Dickinson) marry Aurora. Unfortunately, this means having Maleficent and her shapechanging assistant Diaval (Sam Riley) over for a royal ‘getting to know you’ dinner, with imperious Queen Ingrith (Michelle Pfeiffer) in attendance. And the posh soiree doesn’t go well, with the King seemingly poisoned and Maleficient blamed for the attempt on his life, forcing her to leave under a cloud of shame that damages her relationship with Aurora and her soon-to-be in-laws.

Two storylines are knitted together in Maleficent: Mistress of Evil and both are entertaining if sketchily drawn. We have the scheming Queen Ingrith trying to separate Aurora and Maleficient, while secretly building fairy-killing weapons with the aide of pixie Lickspittle (Warwick Davis). And there’s a separate story for Maleficent after she’s injured while fleeing Ulstead, only to be rescued by another “Dark Fae”, Conall (Chiwetel Ejiofor), who takes Maleficient to the last surviving underground refuge of her winged race.

The latter story’s the most interesting of the two, even if it does seem strange Maleficient’s been unaware of her own origins as a species hunted to near-extinction by mankind. And quite what her place is within their society’s a bit hazy drawn, as they initially seem to revere her magical powers (as if that could tip the battle with humanity in their favour), and yet later we see Dark Fae doing sorcery themselves. So which is it? Maybe we’re supposed to think Maleficient is just a particularly adept or powerful sorceress, but that’s not communicated well. And by the end of the movie, it seems Maleficient is actually the reincarnation of a mythical Phoenix? Still, getting to explore the backstory of Maleficient’s people, with actors like Ejiofor and Ed Skrein (as a hunky warrior Dark Fae), is broadly entertaining… even if it does mean Maleficent is marginalised for a long time in the middle. 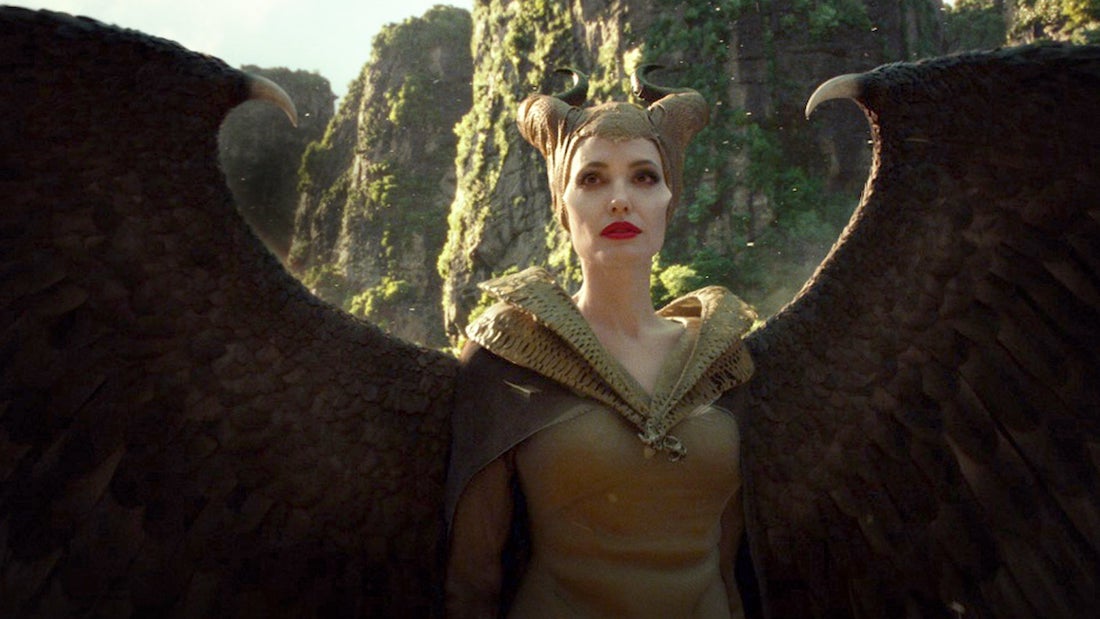 Michelle Pfeiffer’s involvement in this sequel was cause for excitement. She was wonderful in Stardust (2007), which took place in a similar fairy tale world, and Pfeiffer portrays a worthy adversary because of her intelligence and planning. It’s just a shame two such incredible and beautiful actresses don’t get much screentime together. The royal dining scene where everyone’s on edge around Maleficient, all trying to be polite while secretly scared she’ll turn them all into frogs or something, is one of the movie’s highlights. Pfeiffer and Jolie excel in these moments together… but are then separated for most of the movie. And no matter how well Pfeiffer plays her, Queen Ingrith doesn’t stand a chance in the climax because she has no magical abilities of her own. It’s a shame Ingrith doesn’t steal power and become a true threat—if only to see Pfeiffer and Jolie going at it as powerful witches.

Visually, Rønning continues the style already established, but it’s not as enchanting and magical this time. It lacks some of the edge found in Robert Stromberg’s vision, and its fantasy elements are traditional to a tedious degree. There isn’t much that stands out as unique and interesting in terms of the landscapes and creatures, making it feel like a Chronicles of Narnia movie with a touch of Shrek (2001). It cost $185M to make and they certainly don’t scrimp on the CGI pizazz, but you’re unlikely to come away marvelling about anything you’ve seen here. It’s a good version of familiar fantasy fare - small-faced fairies, muscled men with feathered wings, even ‘walking tree-men’ that look like someone took Groot from Guardians of the Galaxy (2014) and just added more twigs and leaves. But it did just win an Oscar for ‘Best Makeup and Hairstyling’, which seems deserved in the area of cheekbone enhancement at least. 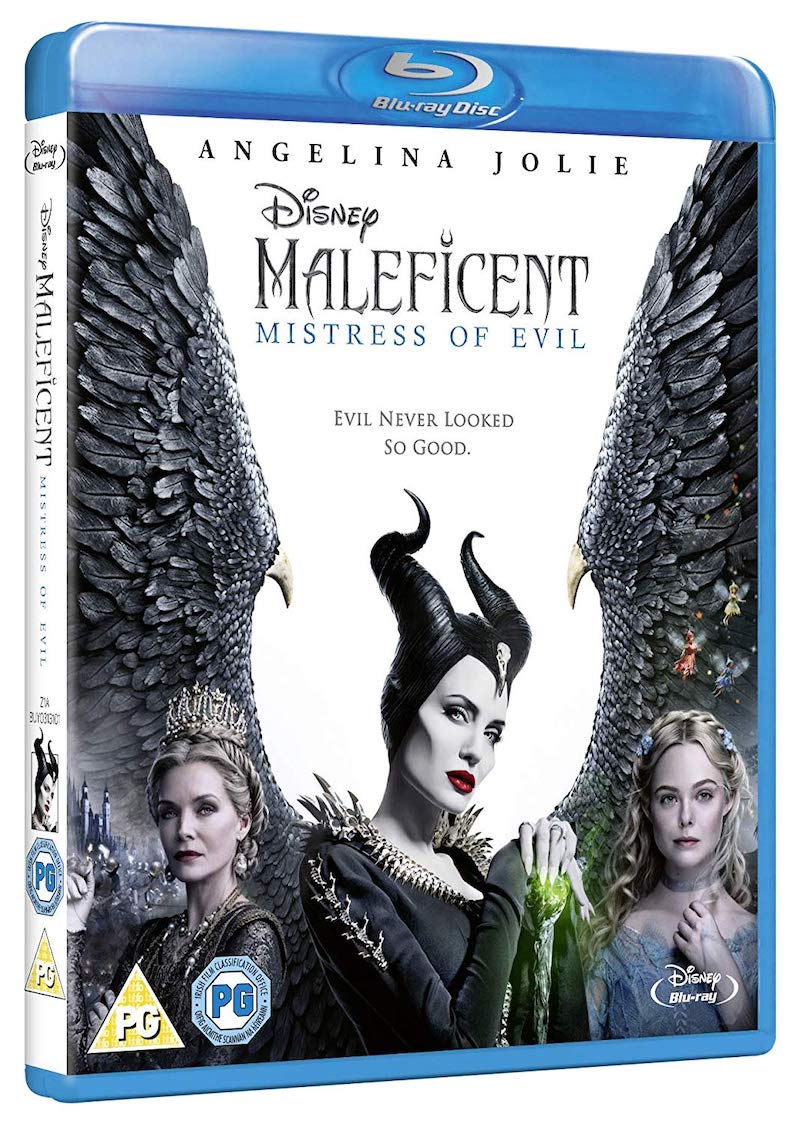 Shot on Panavision Millennium DXL2 and Red Helium 8K cameras, Maleficent: Mistress of Evil has a 2K digital intermediate that will undoubtedly look better on its 4K Ultra HD release. But, alas, on this occasion I could only sample the 1080p Blu-ray, but it’s still a gorgeous 2.39:1 ratio presentation even without HDR10 and an uptick in resolution. The movie is amazingly colourful and bright, but also dark and gloomy, giving you a wide spectrum of visual experiences.

The better Dolby Atmos track is a 4K UHD exclusive, annoyingly (as Blu-ray is capable of holding them), but the Blu-ray’s Dolby True HD 7.1 track is still good fun with big effects and an immersive soundscape. It just lacks the height and directionality of the Atmos track, by all accounts.