James Dormer is a British screenwriter, who has worked on TV shows like Sky1’s Sinbad, the BBC’s Musketeers and Spooks, ITV’s The Fixer, and as co-executive producer on the Cinemax/Sky action thriller Strike Back. He also wrote the 2014 Nicholas Cage movie Outcast. Now, he’s the head writer and executive producer behind ITV’s new fantasy action drama BEOWULF: RETURN TO THE SHIELDLANDS, and I spoke to him about this latest project…

DAN OWEN: It’s only fair to start at the beginning, so how did Beowulf: Return to the Shieldlands originate? You have a background writing tele-fantasy with Sinbad and period action with Musketeers, so was this a next-step you’ve been intending to take for awhile?

JAMES DORMER: I was approached by Tim Haines and Katie Newman at ITV, who asked if I’d be interested in working with them to reimagine the poem Beowulf for a family audience. Who wouldn’t jump at the chance to make a boy’s own adventure packed with good, evil, swords and leather trousers?

Beowulf is an Old English poem not attributed to anyone, so were you excited by the creative freedoms of something that isn’t under copyright?

In truth I was excited but also nervous; the poem is viewed as a keystone of our storytelling culture. But actually what survives in writing is just one iteration of an oral narrative brought to our country by Scandinavian immigrants. There would have been different versions of the story before and after the one we have—it was a living thing that changed to fit the needs of those listening. The hairy Viking who first told this story was surely spinning in his grave (or at least in his seat at the feasting table in Valhalla) when he saw the Christian tropes laid over his original pagan tale in the written poem. 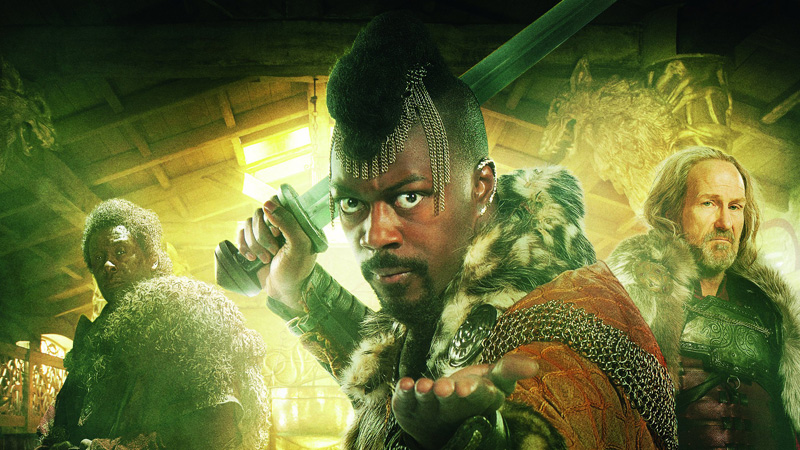 But for me that was a very liberating thought: the story is just a prism through which we look at and try to understand ourselves. Thus, for example, we felt able to transport the story from 8th-century Scandinavia to the mythical realm of the Shieldlands—allowing us a multicultural cast that much better reflects our audience today. You wouldn’t believe the Twitter hate I’ve had for that… turns out I’m both a race traitor and a cultural Marxist, and there was me thinking I couldn’t multi-task! But for every person who screams there were no black people in 8th-century Scandinavia, there are many more who instinctively understand what we’re doing and why. I’m very proud we made that decision and, interestingly, one of the main subtexts of the show is peoples fear of ‘the other’.

I think most people know the gist of the Beowulf storyline—certainly the idea that Beowulf is a monster slayer, and the existence of a creature called Grendel—but most people have probably only seen this story adapted in the 2007 Robert Zemeckis movie. What does your take offer that’s different, and why did you approach things that way?

I think the biggest difference is that the Zemekis movie had a couple of hours to tell the story of 3,000-odd lines of poetry. Our brief was to create a first season of twelve or thirteen episodes, with characters and story that have the potential to play out over a further five series if the show finds an audience. That allowed us to make the characters and the steps of that story more complex and, hopefully, as the story unfolds, more surprising. We wanted to hold on to the themes of the poem: honour, courage, good, evil, death, wisdom, and even the nature of celebrity. But we live in a more complex world now, and felt an audience would look to us for a slightly more nuanced take on some of these: we wanted the heroes and the villains to have dark and light to them. Our take was heavily influenced by the Western genre (which deals in many of the same themes as the poem), and the character of Beowulf certainly has a little of the DNA of Ethan Edwards from The Searchers. 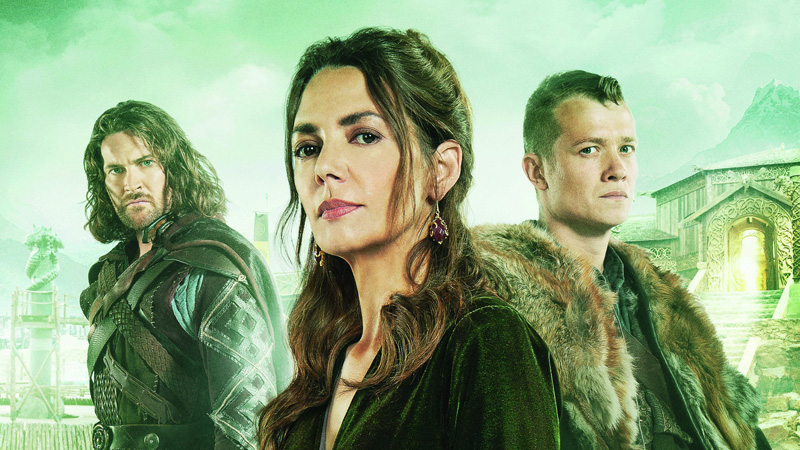 Similar shows have been a staple of weekend TV in the UK ever since Doctor Who returned in 2005, but for every big success like Merlin and Primeval there’s been relative flops like Robin Hood, Demons and Atlantis. When devising Beowulf, were you mindful of what seems to work with audiences based on previous hits and failures? Or was that never a concern?

This is all about the audience. We want them to care for our characters and we want take them on a thrill ride; for them to feel love, hate, fear, surprise, and excitement. But at the same time the old William Goldman maxim ‘nobody knows anything’ is as true of TV as of film. It can be counterproductive to spend your whole time second guessing what the audience want—not least as often different members of the audience want different things! Also, as far as I’m aware, its been a long time since Sunday evenings specifically have been a natural home for this kind of show. But it would be great if it were so again. It may be my fading memory playing tricks with me but I remember as a kid in the seventies sitting down with my sister and mum and Dad to watch the TV series of The Last of the Mohicans and being transported from a front room in Sheffield to another world. That was a big inspiration to me: to try and recapture just a little bit of that early Sunday evening magic with the whole family enjoying something together.

There’s a fantastic cast in Beowulf—from lesser-known stars like Kieran Bew and Lolita Chakrabarti, to recognisable supporting players in Elliot Cowan, Laura Donnelly, Edward Hogg and David Harewood. But you also have some international flavour with William Hurt and Joanne Whalley, too. How involved were you with casting, and can you tell us anything about how this ensemble came together?

Along with Tim, Katie and our amazing producer Stephen Smallwood we worked with the Casting Director Sam Jones. Sam worked wonders in bringing us so many brilliant actors: some well known and others less so but all so talented. There was a little bit of a ‘putting together the perfect team for a heist’ about it. Ed Spellers was the first to be cast, as we all thought he’d be great for the complex role of Slean. We thought it would be hard to find a Beowulf in his thirties who hadn’t already zipped off to Hollywood.

Then Sam suggested Kieran Bew; who’s not only a great actor but also a champion fencer from Northumberland! Just as we were congratulating ourselves we heard he’d sold his flat and was moving to LA. Fortunately, we convinced him to stay. Then we found out William Hurt was a fan of the poem and I (terrified) was dispatched to convince him to join us—an amazing experience, as I got a two hour masterclass in acting—but in the end it was the pull of the poem and the pictures my kids had drawn of him as Colonel Ross in The Incredible Hulk that swung it.

And behind the scenes (and in the background of lots) there was a whole army of Department Heads, crew and Supporting Artists people who battled pretty much everything but mythical monsters to bring the show to life. 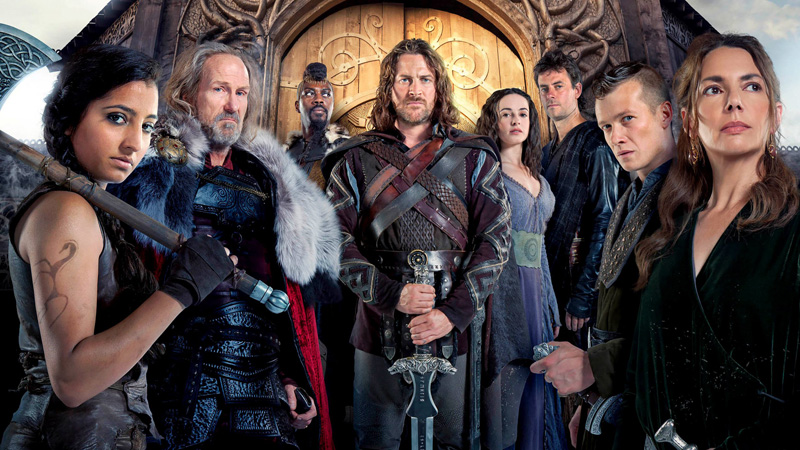 ITV faced criticism in the press last year over the violence and imagery used in their now-cancelled Jekyll & Hyde series, which aired before the watershed like Beowulf. What’s your opinion on the suitability of shows like this, at a time when young children are watching? Did you know you’d have a 7pm time slot in advance of the writing and filming? If not, have any cuts been necessary?

The time slot wasn’t fixed early on, but we were aware from the start that we were making a family show and embraced that. Beowulf is an action-adventure show with monsters and warriors battling and inevitably some of them will be hurt and even die, but I think it’s all about how these things are handled. Hopefully we’ve struck the right balance. We’re not about gore and nudity, but we are about thrills and emotional resonance. Bambi was a bigger influence than Game of Thrones.

I’m sure you’re hoping Beowulf is a big hit for ITV and a second series is commissioned. Do you have a longterm plan for where the story and these characters are heading, or have you just been too busy focusing on these first twelve hours?

If the stars align we have a rough plan mapped out for a five series arc. We’re already writing the first episodes of season two—not because we’re counting chickens—but because if we are greenlit for another season we will only find out in February and then have to start shooting a few weeks after that.

Finally, can you tease us with anything about forthcoming episodes—like who or what we can expect to see?

Look out for the Davids—David Harewood, David Bradley and David Ajala are coming! Expect to meet more monsters and beasts: Skinshifters, Warig war bands, Sand Wyrms, as well as human adversaries like the fearsome Wulfing warriors from across the sea. And finally the story of the poem will play out… but in unexpected ways, the seeds of which have already been planted…

James, thanks for your time and good luck with the show!

BEOWULF: RETURN TO THE SHIELDLANDS continues every Sunday on ITV at 7pm in the UK.