Brooklyn is a period drama adapted from Colm Tóibín’s novel of the same name that follows Eilis Lacey (Saoirse Ronan), a young Irish woman who leaves her quiet seaside town on the Emerald Isle for the brave new world of America to make a new life for herself. After finally settling across the Atlantic, Eilis finds herself pulled back home, and becomes caught between two different lives, on two different continents. And, of course, between two different men…

It’s often difficult for a romantic drama to stand out and set itself apart, in a genre that so often feels predictable. The writing, acting and direction all have to be top notch to make the stories count despite audience familiarity. Sadly, in Brooklyn‘s case, director John Crowley’s film can’t manage it.

As the lead, Saoirse Ronan gives a strong performance, ably playing Eilis as a meek young thing or a confident and spirited woman as the scene demands. Unfortunately, Eilis is quite a dull character; and Ronan’s large, emotive eyes, and glowing Irish charm can only do so much to liven her up. Her potential beaus are little better: Emory Cohen’s Italian American Tony is a boring hunk who mumbles his way bashfully through the film, while Domnhall Gleeson’s noble Irishman Jim is so bland as to make it curious that Eilis would even look twice at him.

Still, there’s an argument that Eilis isn’t really choosing between two men—she’s choosing between two countries. America affords her friends, freedom, and the glamour of a New York that’s about to enter the 1960s. That’s an exciting prospect for a young lady who’s never seen the world. And yet, home is where the heart is, and while Jim may be less interesting than Tony, the life he offers—security, safety, proximity to her family and traditions—are everything Eilis had always wanted but didn’t have before she left for America.

The notion of a girl being torn between two very different worlds is a strong one; Eilis is caught somewhere over the mid-Atlantic, not knowing which way to swim. But the screenplay, adapted by Nick Hornby, is largely uninspired and—barring one mid-film surprise—completely predictable.

Once Eilis returns to Ireland, we’re essentially watching the first half of the film repeated: she’s initially out of place and awkward, finds a man, settles down, and finds a peace that’s threatened when she’s called back to the U.S. Having already seen that play out for an hour, given the boring characters, the only real dramatic hook to keep you on board for the latter half of the film is waiting to see which life she chooses in the end—Ireland or America.

Worst of all, though, is the film’s horrendously overbearing score by Michael Brook, which is slathered on too thick and drowns every scene in mawkish strings. A film score should accentuate the visual drama unfolding on-screen, but here it batters you over the head, signposting exactly how the film wants you to feel at any given point. Rather than complementing the action, the score becomes dramatic canned laughter, and it’s suffocating as a result. Added to the soft-focus visuals from cinematographer Yves Bélanger, and it leaves the whole film feeling too syrupy and trite. 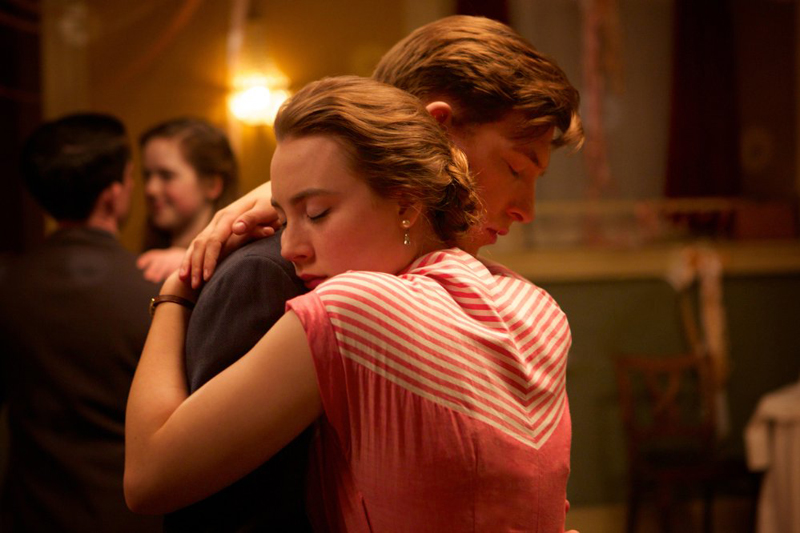 But it’s not all bad—Brooklyn does have some good points. As mentioned, Ronan is marvellous as the naïve but driven young Irishwoman, expertly showing her transition from timid wee lass to confident American woman, but it’s Julie Walters who really steals the show as Ms. Keogh; the cheerfully acerbic landlady and den mother to Eilis and a group of other girls in New York. Her Irish accent may not be the strongest, but Walters’ screen presence is such that it really doesn’t matter. The scenes set in Brooklyn are far more interesting than those in Ireland, and a large part of that is down to Walters’ gleefully spiky performance.

She’s also given able backing by James DiGiacomo as Tony’s firebrand eight-year-old brother Frankie, whose outbursts at a family dinner are a hoot. It makes you think that Brooklyn might have been positioned as a comedy, considering the film misses these characters and their humour enormously once the narrative loses track of them halfway and the story returns to Ireland.

The film is always at its best when it’s about a young Irish girl trying to adapt to life in the intimidating landscape of America, trying to find both a new home and herself in the process… but while her romances are a big part of her growth, they’re also the least interesting aspect of it.

Seeing more of Eilis’ working at a lavish New York department store (under Mad Men‘s Jessica Paré), or helping kindly Father Flood (a warm Jim Broadbent, also struggling with the accent) in a Brooklyn homeless shelter would have made the film more interesting. Ideas are floated—that the homeless they feed are the immigrants that built the city, cast aside once it no longer needed them—that would have been more interesting to explore. The culture-clash Eilis experiences is where the real story lies, but it’s too often not the main focus.

The film’s best moment also concerns the plight of Eilis expatriation. Early on, at Eilis’ last dance before departing for America, the camera focuses in on her face, and lingers there for a very long time as she looks around, taking in every last detail of her established life; of her home. It’s a beautifully observed moment—no coincidence that it’s one that the film’s oppressive score leaves alone—and Ronan perfectly conveys what’s going on in Eilis’ mind as she absorbs every aspect of the moment; weighing it, and everything about her young life in Ireland up to that point.

Brooklyn isn’t a terrible film; it’s just a very uninspired one. Perhaps that’s even worse. It has that pleasant but ultimately dull sheen that many associate with the 1950s itself. A few entertaining supporting roles, and a few moments of fascinating culture-clash are excellent additions, but the film’s strongest aspects are too often lost under its boring romances and the oppressive score. The smaller moments of life in 1950s New York and Ireland are both well observed, but the larger narrative—the story itself—unfolds with scant surprise. Ronan really is superb, though—but her performance deserves a better film than Brooklyn.

writer: Nick Hornby (based on the novel by Colm Tóibín).