Sam Raimi’s Evil Dead trilogy can proudly boast one the most fervent cult followings around. The original film launched the careers of both Raimi and his leading man Bruce Campbell—now a genuine cult legend—but it’s in the increasingly bonkers and hilarious sequels that each cemented their credentials as the overlords of the horror-comedy sub-genre. Well, grab your chainsaw, because the boys are back in town with Ash vs. Evil Dead!

Virgin Media have snapped up the UK rights to screen the series (it airs on STARZ in the U.S), which depicts the continuing adventures of Ashley J. Williams, as he has to again battle the forces of evil and prevent a plague of demons wiping out mankind. You can watch the first five episodes Virgin’s on-demand service right now, while the remaining episodes will be released weekly, in line with their U.S airdates. 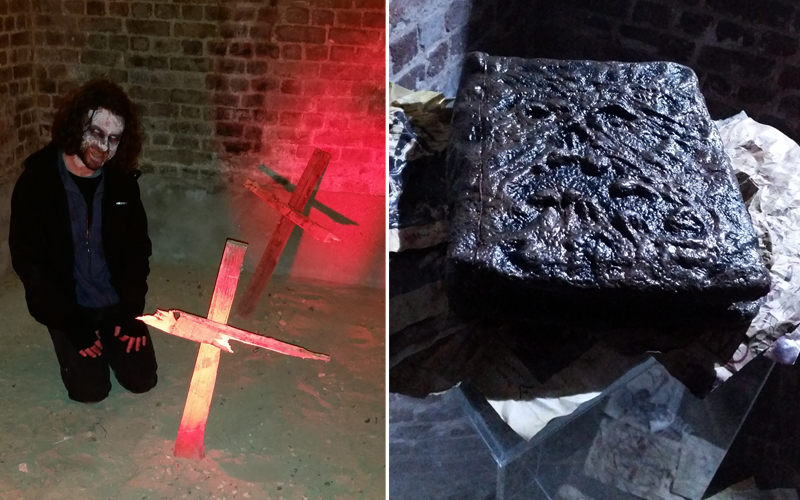 And where better to host the UK premiere of the series than at The House of Detention—the creepy basement cellar/vault of a former 1800s prison, situated below the streets of Central London? Oh, and did we mention? The prison is haunted, too. Gulp.

As if the setting wasn’t inherently eerie enough, the warren-like complex of tunnels is pumped full of fog from a smoke machine, rendering visibility something of an issue. Chillingly, screams can be heard emanating from somewhere deeper in the tunnels. A tape, surely. Just a recording, played for effect… right?

It turns out the tunnels are infested with fully made-up ‘Deadites‘ (using the vernacular of the series); some of whom are behind bars, while some roam worryingly free and proceed to shuffle around the venue, slipping in and out of shadows and launching the occasional grab for flesh, or unleashing the aforementioned banshee wails from hidden corners. 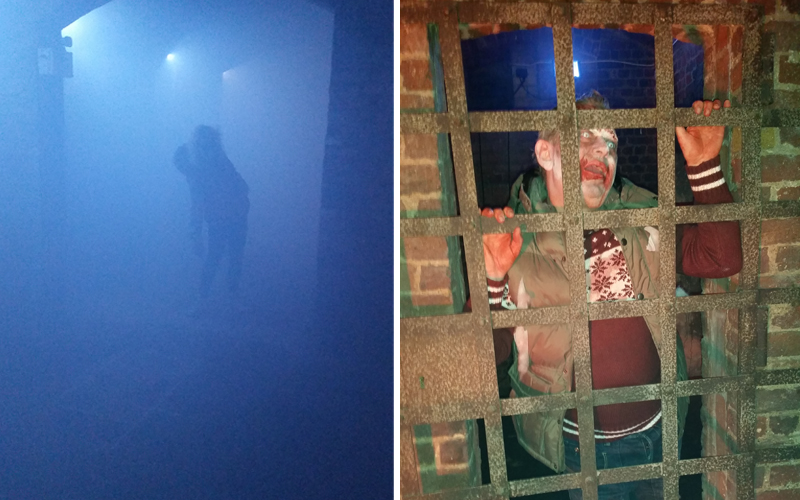 It all makes for a genuinely unsettling experience—but, true to the Evil Dead brand, it’s not without its laughs. One of the ghouls is more intent on dancing and telling jokes than actually scaring people—although the effective make-up combined with the laughs just makes him seem even more chillingly demented!

The labyrinthine former-prison is also adorned with various props from the show, including Ash’s famous costume (blue-shirt, leather braces, numerous blood stains), a chainsaw (which you can pose with at a photobooth to create your own demon-killing .gif! — see below), and even the famous Necronomicon: the book of the dead from the films, written in blood, bound in human flesh, containing evil incantations. And the refreshments provided? An Ash-inspired variation on the Bloody Mary, natch.

As for the series itself, it’s a triumph. It’s been decades since the last instalment of the film saga, and the TV version wisely acknowledges this. Ash is now older, rounder, and altogether a more tragic figure. He’s aged, but he doesn’t like to admit it, behaving with the same bluster and bravado that he always did. Only now, it doesn’t play so well, and he’s something of a tragic figure. But Ash’s obliviousness is part of his charm—and when the Evil returns to plague him once more, it’s remarkable how quickly he transitions from obnoxious schmuck to charismatic hero once more.

Bruce Campbell remains as eminently watchable as ever, diving back into the role that’s defined his career with relish. He’s clearly having a great time, and you’ll certainly have one watching him. For further evidence, look up another Campbell-starring cult-classic Bubba Ho-Tep, in which he plays an ageing Elvis Presley who fights an ancient Egyptian mummy in his retirement home, with an equally aged John F. Kennedy for support. Oh, and JFK is black. I promise there’s an explanation for all of it… 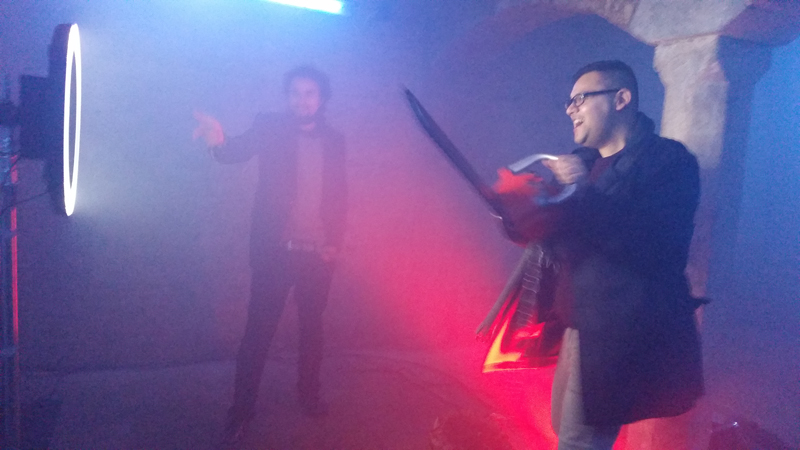 Ash vs. Evil Dead is far heavier on the comedy than the horror, and it’s an absolute hoot over these first two episodes. While there’s plenty of gore, the series never really goes out of its way to truly scare you. The naff-nature of some of the effects are definitely a hallmark of the series, and you’re more likely to erupt in screams of laughter than of terror. (The reason for the demon’s return after all this time is particularly hilarious.)

The series sees Ash joined by two new companions: Ray Santiago‘s Pablo, an affable but dopey co-worker at the department store Ash has wound up working for, and who believes that Ash is the prophesied saviour of humanity; and Dana DeLorenzo‘s Kelly, the object of Pablo’s affections who gets dragged into the horror when her family is targeted by the Evil. Elsewhere, Jill Marie Jones plays Amanda Fisher, a state trooper trying to solve the grisly, supernatural death of her partner; while Lucy Lawless—another cult favourite thanks to Xena: Warrior Princess and Spartacus—plays a mysterious stranger. 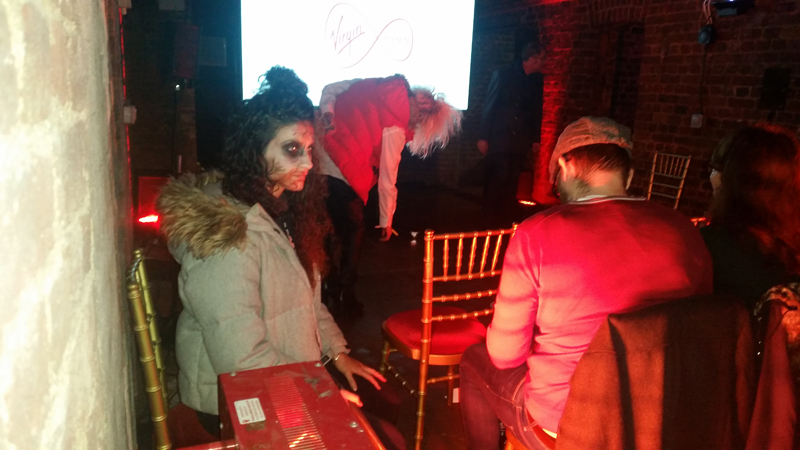 The latter two will surely have more to do down the line, but it’s the former trio that take centre stage over the first two episodes, and they make a great team. The three are all engaging, likeable, and funny, all in distinctly different ways, and play off one another well. In fact, spending time with them is such a blast that it feels like something of a chore when we have to cut back to see what Fisher’s up to. Still, it’s early days, and once she inevitably meets up with Ash and co. her arc will surely improve.

Sam Raimi directs the first instalment, and includes all sorts of fun flourishes, including aerial shots, some cheeky editing, and of course, his own patented ‘shakey-cam’, in which the camera assumes the POV of the Evil Force and stalks its way above, over and through the environment on its way to its victims. You get the sense that he’s glad to be back playing with the toys that started his career off. 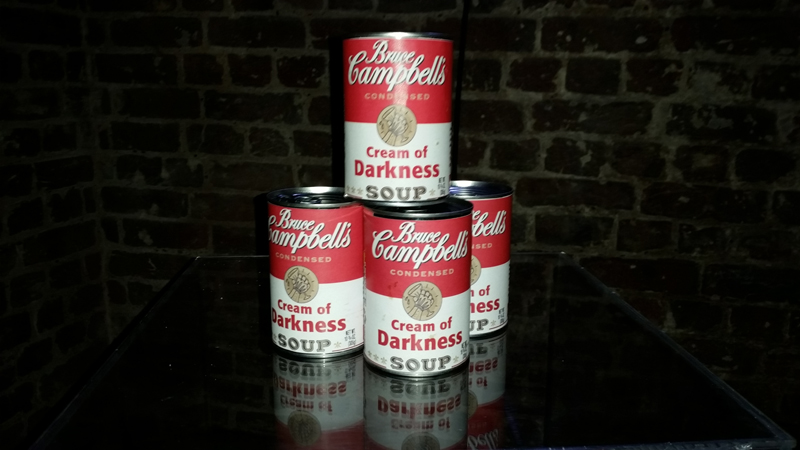 The only real concern is whether something like this can be sustained over a whole season (or even multiple seasons—it’s already been renewed for a second run). As gleefully fun as it is, just how many times we can watch Ash dismember Deadites with his chainsaw before it becomes blasé? Still, the first two episodes manage to find variations—the second hinges around a very awkward (and very funny) family dinner—but the writing will need to remain as vibrant and fresh to stave off diminishing returns. And with Raimi only helming the pilot, that the second episode is just as entertaining is hugely encouraging—with director Michael J. Basset capturing the same tone and energy so brilliantly.

All in all, Ash vs. Evil Dead is a brilliantly funny, hilariously gory, and gleefully self-aware comedy series. If it can sustain the pace in the long-term, then the cult status of the franchise is in no danger. Either way, as long Campbell’s at the fore, you’re pretty much guaranteed a good time.

6 to See this December